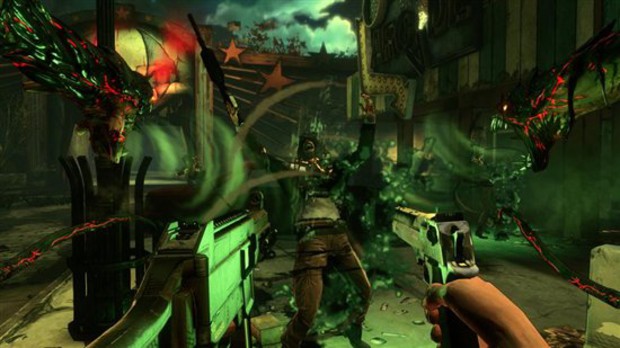 Quad wielding at it's finest

Alongside the single player campaign, there’s a co-op campaign called vendettas, which feature 4 darkness wielding characters running missions for Jackie alongside the main campaign. Each character has one of Jackie’s abilities from the game and a darkness infused weapon with which to wreak havoc. While the co-op campaign can be fun with friends, it gets old quickly when you only have 1 unique ability and only about 2 hours’ worth of missions.

The Darkness 2 is one of the most fun and unique shooters to come by in the past few years. It’s both a breath of fresh air and a familiar friend. It’s solid throughout, but throughout isn’t very long. With a 6 hour campaign and a low replayability co-op mode, the value proposition isn’t very strong. It’s an excellent rental and a great buy when it hits the sub 20 dollar range. Despite that advice, I really hope the game sells well, because the ending sets up for an extremely interesting sequel that I sincerely hope happens somewhere down the line.

4/5
#ShareonCommunityBlogs
Login to vote this up!