Location: Eastmost Penninsula is the secret. And misspelled. 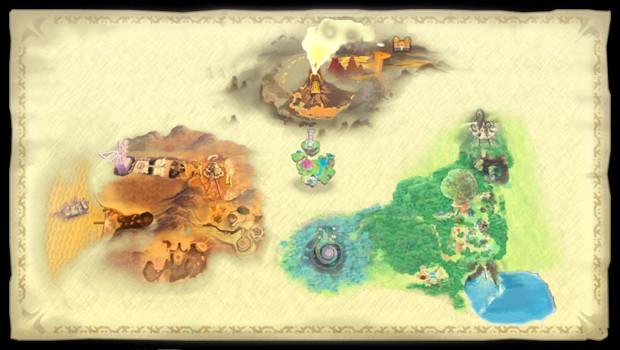 Similarly, Skyward Sword took one step forward while stepping two games back; rather than flooding Hyrule in water, the islands of the most recent Zelda game float above a sea of clouds. Below those clouds lurk elements familiar to many an afficionado, what with the staple, nature-elemental dungeons and enemies we've all seen plenty of times before. Despite being a rather radical take on the Zelda norm, the Hyrule of Skyward Sword manages to retain enough of its predecessors' familiarity to feel just as homey as any other take on the land.

While it may seem I've spent the bulk of my time so far focusing mostly on the visual consistency of Hyrule's reinterpretations over the years, many of Link's haunts have also built an aural legacy. So many locations in Hyrule have established their own theme music, with core elements that have returned over and over as their assigned homelands have returned. Also recurring are the tasks Link has needed to perform in many of those locations, both in the form of overworld quests and in regards to the dungeons to explore there. These elements have lent even more persistence to Hyrule as a whole, and subsequently the the Zelda series en masse.

There are few game settings out there that have endured for a quarter of a century as Hyrule has, which is a testament to how much work has gone into preserving the essentials of the land Link and Zelda call home. Knowing they can come home to such a familiar kingdom is likely one of the Zelda games have had such staying power with long-time fans and draw for neophytes, keeping the franchise thriving regardless of the occasional missteps made with the games. That fans swore and fought for years over the likelihood of an established series timeline, even in the face of repeated denials on Nintendo's part up until their recent acquiescence, also lends creedence to the enduring permanence of Hyrulian landmarks and of the kingdom as a whole.

Knowing now that the timeline and interconnections we all thought existed were truly there all along makes it clear that great care has been taken over the years to maintain Hyrule as a locale, and in some respects, a character in and of itself, and it leads one to hope Nintendo will continue to keep up the good groundskeeping as long as Zelda games continue to be made. Hyrule's been a home away from home for me for quite some time, and I don't know what I'd do if it suddenly wasn't there to come back to.
#OpinionEditorial
Login to vote this up!