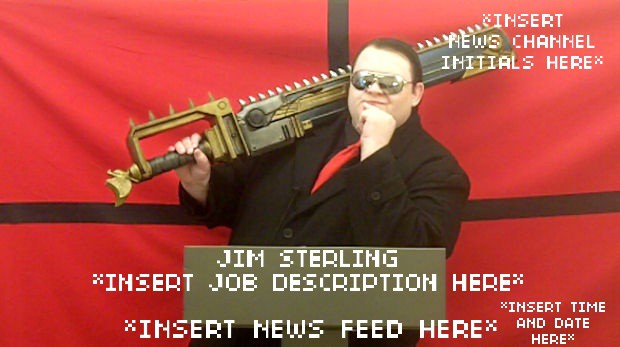 Some ex-Destructoid members claim he is the reason why they are not part of the site anymore. Some so-called Destructoid members claim he is the reason why this site is rubbish, although those who send those messages do so on a regular enough basis with enough hate to make you wonder why they don’t leave. For the rest of us, we take him as he is; a British guy who has knowledge of videogames, who can put idiocy under the spotlight and show for what it is, and someone unafraid to give his view of what he thinks and knows about a game in a review.

Jim has gotten into controversy one or two times, but that doesn’t stop him from continuing to be in attendance for Destructoid or his videos on the Escapist. This is usually enough ammo for the mainstream media to keep their distance from him. However, I believe that there will be at least one corporation that will go ‘Hey, we need material for this violent videogames scandal thing, we may as well get this Jim Sterling guy. He’s outspoken and stuff, he’ll give us ratings if he says the f-word. And he’s exactly the kind of sucker we want to rip into.’ Unfortunately for them, I don’t think that is going to happen that way.

For Jim, 2012 will be the year his notoriety will increase, simply because he has managed to increase his exposure a bit within the last 52 weeks. 2/1 he says the word ‘bias’, 3/1 he has a toucan on screen, 5/1 he swears above the level of ‘crap’.

So what do you think?

Did I lack a bit of reasoning somewhere in these predictions, or that you have a piece of information/news that already confirms it/shoots it down? Comment and be gentle with me. I am a human with feelings. Do you have a prediction? Comment, give your reason, however sensible, wacky or outlandish. Want to give me any kudos if these come true? Do so, but I’m giving a tenth to Jesus. Tithing y’see.

Whatever happens when commenting, don’t suck. You don’t want to disappear like Surfer Girl.
#OpinionEditorial
Login to vote this up!