Being a Jolly Good Fellow in Dark Souls Co-op

4:19 PM on 01.03.2012 (server time)    0
If you listen to me on Twitter it's no secret that I play a lot of Dark Souls. A lot of the time I spent in the game was in co-op play, or, as we Sunbros like to say, JOLLY CO-OPERATION. I've played over 60 games of co-op at this point, and I find it one of the best ways to get souls and humanity in the game. Plus, it's super fun! Everyone knows what the goal is (usually), and it leads to a really nice joint effort.

But there's more to co-op in this game than just putting down your sign or touching someone else's, then swinging away. There are definitely ways to be a good host or guest, and I think it behooves us all to try to be enlightened about these things. With that in mind, I'm writing this as a kind of guide on how to be a good co-op partner. I hope it will lead to much jollier sessions in the future.

I won't talk about the actual mechanics of summoning, because it's already covered in great depth elsewhere, but more about strategy and etiquette. I'm covering most, but not all bosses, omitting ones that aren't too interesting for co-op or which I don't have much experience with.

You know what? We're gonna do "DOs and DON'Ts", because writing everything out will be way too long. How do I know? I already tried it, then had to DELETE DELETE DELETE.

DO keep an eye on your guests' health, since they can't use Estus to heal themselves. You can use Estus yourself to heal the entire party.

DON'T assume that guests can pick up items or talk with NPCs... 'cause they can't. They can interact with the environment by opening doors and such, though.

DON'T try to lead the host around. It's their world; be... like a faithful puppy! Likewise, DON'T run off without your guests. After all, you want their help as much as they want souls for helping you.

DO try to help the host if they seem lost or severely confused or they're gesturing wildly like they want you to tell them what to do, or they're hitting walls and spinning in circles.

DO donate any spare weapons, armor, shards, and so on that you don't need. This kind of random kindness really breeds goodwill. I was able to skip fighting Gwyndolin a second time because some kind soul randomly dropped me a Darkmoon Bow! I filled up on green titanite shards somehow, so I'd sprinkle them about for fun. People love it!

Now I will move on to specific things I can think of for each of the bosses. 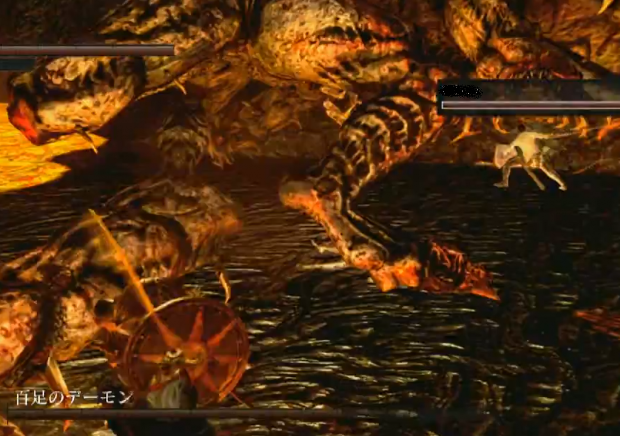 This is perhaps the only good boss for co-op in Demonic Ruins. It isn't a hard fight, so not much advice here. Summon signs are either up at the bonfire or down near the boss door.

DO make a very strong effort to cut off the tail, which snags the host the Orange Charred Ring.

Summon signs are outside his door or at the entrance to the Kiln. Be mindful, though, that a lot of people summon partners for PvP, not co-op.

DO go for backstabs on the black knights if the opportunity presents.

DO try to distract Gwyn as much as possible, to let the host heal. Healing is at a premium in this fight, due to Gwyn's speed.

DO take pot-shots at Gwyn when he's not paying attention to you, but watch out, because the arc on his swings is pretty wide.

DON'T try any fancy tricks like parrying, since the lag is Gwyn's own co-op partner.

DO keep your distance and used ranged magic if you have it. It can make a huge difference.

I hope these suggestions help you be a more excellent buddy in this dark, dark world that goes out of its way to make you feel isolated. Even in NG+ I was able to get at least 10 more rounds of co-op, so keep your eye out for that. It's very helpful and especially fun to play with a bunch of super high powered players. Sun praising time!
#ShareonCommunityBlogs
Login to vote this up!