9:05 PM on 01.01.2012 (server time)    0
You know, they say there are no stupid questions. I don't know who "they" are or how they got the authority to say that, but they're wrong. There are stupid questions and things you probably shouldn't say, lest you want to prove you're a moron to other people.

For a gamer, that wrong thing to ask or say amounts to "Wouldn't it be better to do something productive rather than play video games?" 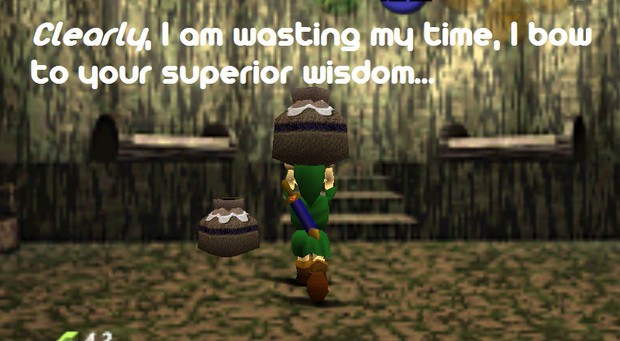 I can find plenty of things other people like that I couldn't be driven to care about, but that doesn't mean those things lack value to everyone. Who am I to question what pastimes make other people tick? Some people dance, some people do woodworking, collect baseball cards or go hiking - do these things get deemed unproductive? Not all of it makes something, but it does help people find some contentment. Its just lame to disrespect something because it doesn't move you personally.

So I'll play my video games and you just do whatever it is you do, okay?

I put up with this kind of talk from my parents and people their age because they're baby boomers. I expect it, they're never going to give us the benefit of validation so long as they're still in charge and I accept that. The generation before them was that way, too. But from anyone my age or even slightly younger... that kind of talk just makes me think less of you. Old people are old, but those that don't want to look like old fools would do well to be a bit less judgmental.
#ShareonCommunityBlogs
Login to vote this up!