Thoughts on storytelling in MW3, Skyrim and To The Moon 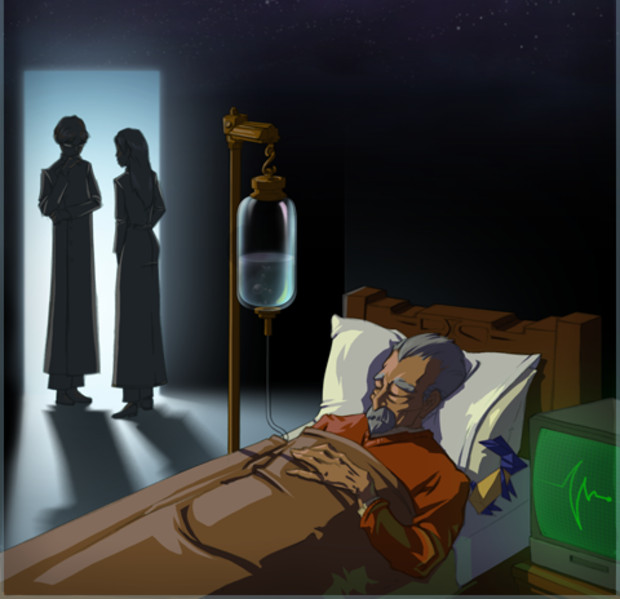 As it’s often the case, there are ideas and experiments on graphics, mechanics, stories, etc that you’ll only be able to find in indie games. A few months ago I saw this trailer of To The Moon, it had beautiful sprites, great music, a unique premise (think Eternal Sunshine, but implanting memories and making dreams come true, before someone dies) and that sold it to me, even if it decided to come out on the brink of the giant tidal wave of big releases. I’m going to try to be cautious to not spoil anything about it, so excuse me if I go vague on some points.

I started this whole thing talking about video games as a format of the interactive media, this could be superficially explained by pointing how different the simulators used for teaching, the interactive books on the “kids software” section, YouTube, and video games are. Alternatively, I’d have to say that we’ve learned “video game” as a word, as a concept, not only as gamers but as a society, and it puts them in a position similar to Kleenex and Q-tips, where a specific brand (like how older people call any video game a Nintendo) or presentation pretty much defines them as a whole.

To The Moon stands on the edge of being an interactive book, a movie, a game, and while I know a lot of people that dismiss it for lacking gameplay, it doesn’t matter, it shouldn’t matter, it might be just my ignorance of similar products, but to me this is a unique story, told in a unique way that deserves everyone’s attention, that deserves to be given a chance.

What makes a game? What separates or merges it from sports or art? There are linguistic and semantic discussions that come up whenever someone says something is or not a game, in the end I would say society defines it, and society will eventually accept or not the labels some people are fighting so hard to get. For now, To The Moon has enough to be considered a video game, you have control over characters, they can interact with some areas of their environment, there are puzzles for you to resolve, the interface is that of an old SNES game, the sprites and backgrounds are reminiscent of oldschool RPGs and it’s sold as a game on online game retailers. None of the inputs required from you are that hard, and I’m not sure if you can’t lose or if it’s just “too easy”, and while I’m personally inclined to say it’s a “non-game”, I find myself unable to say this isn’t a game by definition.

-To The Moon, the interactive book:

I don’t know how much they’ve changed by now, but I remember being on first or second grade when our English teacher would take us to the computer lab of the school, they had a couple of interactive books on the computer, which would be like a regular children book but with animations and with speakers turned on for us to hear the characters and the narrator talk. We took turns clicking parts of the environment in the background and seeing the characters do funny things with them, after all the available options were clicked, the teacher would go to the next page and we’d keep going until the book would end.

To The Moon reminds me of that, when I started playing it I figured it would be like an adventure game, but it didn’t really have enough challenging situations to compare it to them, so in a way, you’re reading this book, you’re given options on things to interact if you want to, but from what I can tell, in the end they don’t make a difference and taking the time to see what happens with the available options just rewards your curiosity with a funny comment. It might sound like I’m criticizing it, but I loved those interactive books as a kid, and this one being done with the classic RPG view/interface makes it more comfortable and appealing to me. It might be presenting itself as something more complex than what it is, but it’s done so well that you forget about it.

I think we’ve all heard criticisms of the long cinematic sequences on RPGs and some other games like MGS or read about how Heavy Rain is just a movie that needs you to press buttons to keep going, we might have even heard people say they’d love to see a certain game as a movie/anime/series instead of playing it. Usually video games reward you for playing, they give a sense of accomplishment, of doing something, of making a difference, but right after “finishing” it I didn’t get that feeling, it was more similar to the one you get after seeing an incredible film that gets to you. To The Moon could’ve easily been a couple hours long movie in sprite format, an instant machinima classic that you’d be likely to remember more than any of the best scenes from your favorite RPG, and good enough to show it to your not gaming friends and even to those movie snobs that know oh so much about films…

…but it choose not to. In the gameplay trailer of TTM (it does have some spoilers), its creator just asks of you to embrace his creation with an open mind, without expectations or demands of what his “game” should deliver to you. I didn’t understood till I played it, and I can’t emphasize enough how glad I am that I did, TTM has an almost perfect balance of interaction, of story, of art and music, it opened my mind to this particular way of reading/playing/receiving/absorbing a story, inspired me enough to write this whole blog and if you give it the chance, it might have as much impact on you as it had on me, and make you think of the future and wonder what else could be achieved.
Login to vote this up!

Hello, I'm Knives but a lot of my friends will usually call me Knivy. All I should have to say is that I live in the happiest place on earth (Tijuana!), but that's not all I'm gonna say.

I currently play on PC, Wii, PS2, DS and 360, I tell myself I'll get a PSP and a PS3 soon but I keep spending money on things like MAGfest, Miami, PAX , Baltinarp and Cancun.