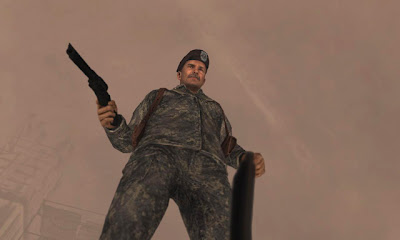 Sure, it might become patriotic gunwank in a few days, when the third installment -- written and developed by a different team -- will be released. Writer Jesse Stern is no longer attached, and I'm under the impression he deserves most of the credit for avoiding the label that... ended up being used to describe the MODERN WARFARE series anyway, possibly by association with Treyarch's pathetic half of the CALL OF DUTY franchise, but still, Stern tried. And in my case, he and what used to be Infinity Ward succeeded.

I've hinted at this point before, but it wasn't until watching this that I felt an overwhelming necessity to expand upon it. As a fan of Bob Chipman's insightful work, I was a bit disappointed that he illustrated his otherwise pertinent argument* about videogames not growing up as a medium by using images from the MODERN WARFARE series -- which is, to my knowledge, the most subversive war series in videogames.

If the words "patriotism" and "Call of Duty" are so connected in your mind that this statement causes an exasperated "whuh?!" to shoot out of your mouth, you can probably blame Treyarch for that. While they did get something right by highlighting the role of the Soviets in World War II, they did pretty much everything wrong in BLACK OPS, which constantly plays like Patriotic Gunwank 101.

The MODERN WARFARE series, on the other hand, already starts unusually. The very first mission of the first game -- not counting the tutorial level -- has you playing as a British SAS operative murdering people in their sleep. The American forces are portrayed in a light that is nearly as ambiguous: at one point, you're going back into a dangerous landing zone to save a downed pilot. In the other, you're playing as an operator in an AC-130 plane, bombing enemies from above the clouds while your colleagues have fun and make detached commentary as if they're playing a videogame (which is uncomfortably reminiscent of real footage of operators in bombers actually behaving like this). 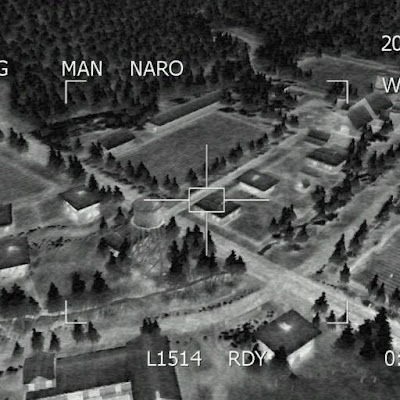 But even though the portrayal of American/British forces is more complex than usual, the game's plot is still fairly straightforward until its end. Surprisingly, it's the coked-up sequel MODERN WARFARE 2 that is the most subversive. In one mission, you play as an American undercover agent helping terrorists kill civilians in an airport. And how is it that no-one seemed to notice the satiric tone of the mission in which American forces protect fast-food restaurants? And for fuck's sake, why does everyone seem to ignore that the villain of the game is an American general?

Perhaps the message was lost somewhat in the midst of all the explosions. MODERN WARFARE 2 is twice as intense as its predecessor, sometimes thrice, and it can be hard to believe a game so insane can also be subtle in its commentary. Every plot development happens on an epic scale, particularly Captain Price changing the course of the war in American soil by detonating a nuclear warhead in low-earth orbit and, just to add to the craziness, accidentally destroying the International Space Station in the process.

Also, maybe you think "the villain is an American" does not constitute enough for biting commentary. And you're right, it doesn't. But the game goes farther than that. General Shepherd's plan is motivated by his outrage at the death of 30.000 American soldiers being received by the world with indifference. So he orchestrates a tragedy to happen in American soil, forcing the country to fight back and win.

The reason he is the villain of a game accused of patriotism is that he is a blind patriot. 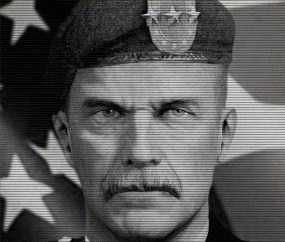 And another point, and this might be me reading too much into it, but it's worth mentioning: Shepherd creates a war, using recent events as carte blanche to fight it in any way he sees fit.

Obviously they don't match up with perfection. If you take it literally, you could interpret it as the Bush administration having planned 9-11. But the overarching point is there, exposing the futility and moral relativism of war. How thousands of people can be sent to fight over a lie.

And this is even more important to highlight since Chipman's aforelinked video was juxtaposing Cinema's reaction to 9-11 and videogames' reaction to 9-11. And while I agree that videogames have been far less thoughful in their approach, I strongly disagree that the MODERN WARFARE series is an example of this problem. The CALL OF DUTY games made by Treyarch, and EA's pathetic MEDAL OF HONOR, are examples of the problem, but MODERN WARFARE deserves credit for its thematic ambition, whatever you think of its execution.

Of course, one could argue that the high-octane style of MODERN WARFARE 2 is not the most appropriate to explore serious, topical messages. That a message like this should be more proeminent, not barely glimpsed amidst the action.

Well, they tried making a serious, grounded game about war based on real-life stories. SIX DAYS IN FALLUJAH. And everyone threw a shit-fit, leading Konami to stop backing the project, which is still unreleased.

*What do I think of ARKHAM CITY's sexism controversy? I'm going to play it soon and decide, but I'm leaning toward FilmCritHulk's article. Particularly the second part, in which he demolishes most of the counter-arguments directed at the first part.
#ShareonCommunityBlogs
Login to vote this up!