Dark Souls is the most fun I’ve had playing a video game in a long time.

12:17 AM on 10.10.2011 (server time)    0
Dark Souls is a fantastic game. It's most certainly not for everyone, but for those of you who can get into the mindset will certainly appreciate and enjoy it for what it's got to offer. A Gothic fantasy action/roleplaying game (of which is already a fairly unique premise nowadays), the world of Dark Souls is one where everything in the world can — and most likely will — kill you. Every single enemy in the world comes back when you die, or heal up and save. When you die, you lose your money and experience (souls), and get put right back as if the entire time you went without saving had never happened — sometimes hours of work. You just keep working at an area until you’ve mastered it. It’s immensely rewarding once you actually make progress. 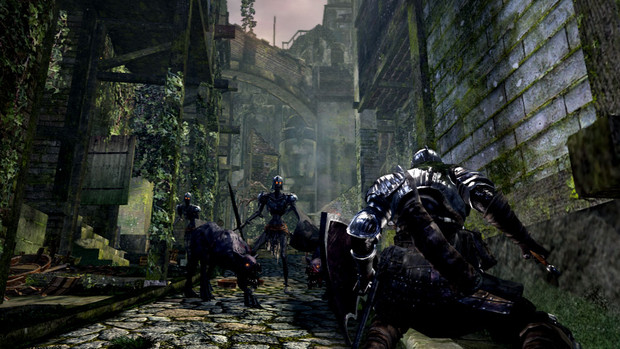 PICTURED: In most games: Cannon fodder. In Dark Souls: Your demise.


The difficulty is intense, but at the same time feels fair and realistic — it literally feels as if you’re one man taking on an army, one by one. There is something so satisfying about taking out dozens of undead soldiers, all in one life, and living to tell the tale; shooting off a dragon’s tail with mere arrows to acquire a powerful sword; exploring the heavily guarded ruins of a castle to find that one guy who's just crazy enough to set up shop by the wayside. That's what makes Dark Souls such a fantastic experience. The feeling of discovering, solving, and eventually conquering the unknown. This kind of game has no place being in the modern game world where difficulty is frowned upon as something unfair, and where exploration is rare, and where a close look at the world usually shows the underbelly of a machine not meant to be seen by the player. And yet it survives, an anomaly that, against all odds, is pretty awesome.
#ShareonCommunityBlogs
Login to vote this up!