4:13 PM on 09.06.2011 (server time)    0
Everyone loves holidays, right? Who doesn't enjoy getting an extra day off from work and school, and I'm no exception. Despite having to work Friday and Saturday, (Long 10 hour shifts both days) I was looking forward to spending Saturday and Monday doing what I enjoy most - gaming! I had originally planned on spending both days getting knee deep in Deus Ex, since it's been out for how long now and most people have probably finished the game at this point. After all, GameFly had already screwed up my previous week by not getting the game out when it was first released and leaving me with only older games to play, which I had little interest in for some reason. So despite grabbing up some time with Black Ops and several calls to the child support office demanding they get off their lazy rear ends and go after my ex, my free time was basically spent hanging out with George.

So bright and early Saturday morning I headed out the door and went straight to the post office. Alright, maybe not. It was Saturday after all. Friday had been a rough day at work with the weekend coming up. I slept in till around 11:00 and ended up having to rush to make it to the post office before they closed. And what did my rushing get me? Absolutely freaking nothing! (Except bills) Because of the holiday weekend the game must have been delayed by a day, meaning I wouldn't get my hands on it until today, Tuesday. My Saturday afternoon ended up with me looking at a blank TV screen.

However, all was not lost. The kids had been bugging me for months to make my chocolate chip cookies, which normally I hold off on until it gets closer to Christmas. (Did I mention that even though I'm good at cooking that I hate doing it?) So after going through the cupboards and making sure I had all the ingredients, I got busy on making a double batch to keep the peace in my family. Now because I hate baking I have a tendency to make BIG cookies. It gets done faster that way. The first batch started off at a decent normal size, but each batch after I'd add a little more trying to get through that stupid bowl of cookie dough as fast as I possibly could. We ended up with only 40 some cookies when we should have, with a double batch, ended up with twice the amount had I been more lenient with the cookie dough. Oh well. Christmas is right around the corner. 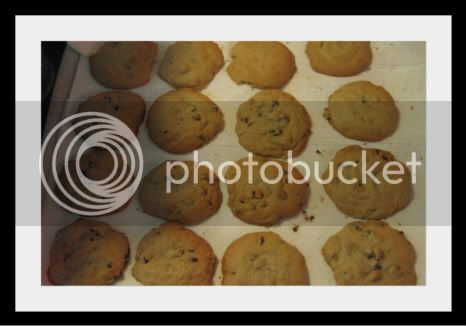 Now Monday was suppose to be nice and sunny outside, so we called up some friends and planned to get together with them and head to Hartville Flea Market for the day. Now Hartville Flea Market use to be a wonderful place to find a variety of antiques, collectibles, and miscellaneous items for cheap. Heck, back when Pokemon cards and Beanie Babies were all the rage you could find those items for prices that weren't stupid and unreasonable, even though everyone else was trying to milk it for all they could. The flea market was held out in an open field and traffic would be backed up for hours, leaving you waiting in long lines if you didn't get there early (like 7 am) in the morning. Well someone decided since the flea market was such a big hit, that they should move it closer to the restaurant and gift shop and build it up into this big tourist attraction. It's still fun to go there and walk around, but you can't find the great cheap stuff you were once able to, and a lot of it has turned into just another extension of Amish Country Shops with outrageously priced food and gifts. And the crowds have doubled....making your arrival time more vital than ever.

So after driving around (for like an hour) looking for a parking place, we were finally able to get out and enjoy some wonderful Ohio weather.

We were able to get in a couple hours of walking around and looking at things before the clouds broke loose and drenched everyone to the bone. As expected, it was mostly a bunch of overpriced crap that I had no use for, but I did see a few unique items worth taking pictures of.

The motorcycle wasn't for sale, but it was kinda neat how the owner had managed to attach so many feathers, rattlesnake tails, teeth, and um.....other things to the handle bars. A few of the venders must have concluded that with the rain, their business would die. So those that weren't covering up the tables and moving merchandise to a dryer location to hold off a little longer, went about packing up their vans and calling it a day. One merchant decided to skip the hassle of repacking entirely, and just dumped his goods on the ground for anyone who was interested to grab for free. Considering what he had maybe he should have kept the book? (In case you can't read it, it's titled Changing Careers for Dummies.

We all decided to head into the buildings next to dry off and buy some coffee and mochas, maybe grab a little snack before looking around at the inside shops. It was crowded. I'm always amazed at how rude people can be when they're looking for a place to sit in a crowded seat yourself establishment. You basically need to send out a scout to hunt down a table first. Then you must have at least two people join you at found table, so other people don't get the illusion you'd like to share the space with strangers. Two more people can then be sent out to question nearby individuals or groups as to if any of their empty chairs will be needed by someone they've sent out to scout. It's a delicately orchestrated procedure that's learned after attending several big flea markets.

After drying off, warming up, and refueling our energy, we began the process of tackling the indoor booths. Yeah, there was nothing worth looking at. Except this:

My daughter and I headed back outside to pick up a couple things we'd passed by previously. She didn't get what she wanted. The merchant had already packed up because of the rain. So we had a mad rush clear to the other side of the flea market to get her second pick. That guy had already started to pack up things into his van, but he was nice enough to unpack the item she wanted.........except she had lost her money. Some where between running to one end of the flea market and then back to the opposite end, the money had fallen out of her pocket. We apologized and walked away empty handed. Halfway back to the building I looked down to see...........her money. Another mad rush back to the packed up van and we scored what we were looking for to begin with. (The guy still had it in his hand. He must have figured if we didn't find the money, that perhaps I'd lone it to her and we'd be back.) After six hours of walking the flea market, dealing with crowds, and being out in pouring down rain, it was time to go. My mom, my daughter, and I headed back to the truck.

We met up in Canton with our friends to grab dinner and say our final goodbyes before heading home. So after all that what did I end up buying? 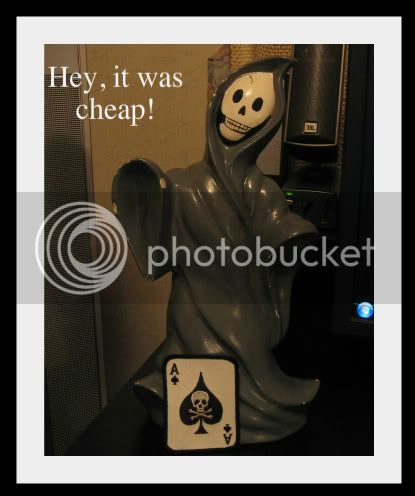 Don't judge me! I collect Halloween things by the way, and with a fresh coat of black paint to get rid of that ugly gray, he'll be as good as new. Think I'll keep the face though.

So that was my Labor Day weekend. 100% game free, being social....and all that. Now today I'm sitting here with not only my copy of Deus Ex, but my copy of Dead Island, as well. Since they both arrived at the same time my daughter and I will not have to sit and argue over who gets to play, but instead rotate turns on each game. I hope all of you had a wonderful Labor Day weekend. Now if you'll excuse me, I have two weeks of gaming to catch up on!