Don't Take It Personally, Babe, It Just Ain't Your Story (DTIPBJAYS) is not one of the greatest games I have ever played. Top 10 maybe, but not Top 5. But don't let me confuse you though. It may not be the greatest, but it is ridiculously important. There are few games that stick out as prominetly as this one.

As the stream of okay-ish games pour from the mouths of developers, big or small, you can almost become dissollusioned, even spoilt by the choice that exists today. It runs like an endless stream, with great gushes of thrashing water, and the bits on the side, where everyone dumps their crap into it. 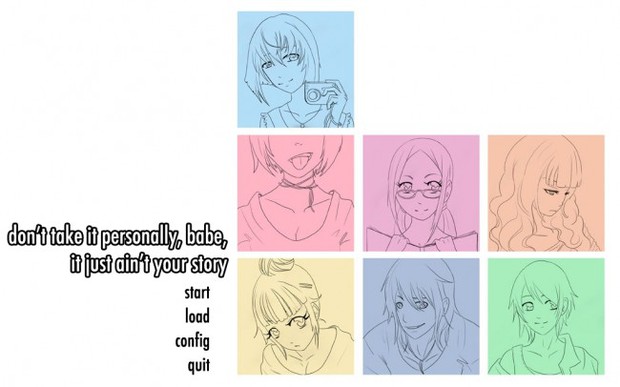 I'm trying to explaing to myself why I love this game so much. I can only come up with one reason.

I have never been so engrossed in a story where I trully believed I was the main character.

No don't worry, I wasn't running round talking to teenage Japanese teenagers while pretending to be a depressive teacher. But I think with every game I've ever played, I always had that thought knocking round my head that this isn't your story, it's theirs or some writer locked in a room's story. But, this game made me truly, 100% believe everything in the story, thus making me believe I was the character.

Maybe it's to do with the fact that it's probably the most quiet game I've played in a long time. No explosions, no gunfire, no murder. It all seems to revolve around the subplots, which is a game type I've never experienced before. You become bogged down in the social aspect, because there is no other aspect. Therefore you end up actually concentrating, even if it is on needless, idle chit chat.

I remember reading about how when you see a magic trick, you child mind becomes wondered by the illusion, however when you find out how it works, the cynical side/the adult side kicks in. This is what DTIPBJAYS is. A magic trick. One which I'll never find out the illusion. After the ending, I spent the next 40 mins telling myself "They fucked me over!!" with a pure, elated smile on my face.


DTIPBIJAYS is something that's given me faith. Faith in what, I still have to figure that out.
#ShareonCommunityBlogs
Login to vote this up!