Shadows of The Damned Review 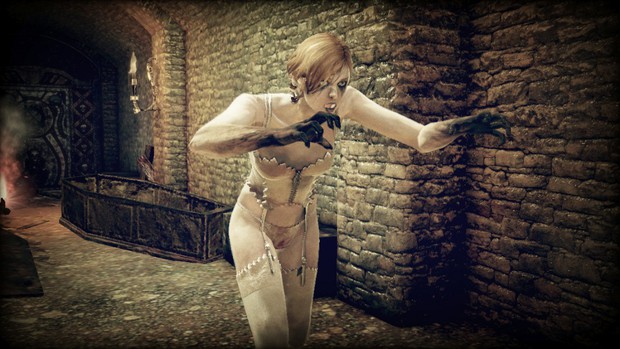 There are a few things I have a bone to pick with though. Although you eventually get used to it, the shooting is very loose and feels far to floaty for a third person shooter. The biggest offender though is basically the whole 4th act. It opens with a very boring "Turret" sequence where you will hear the main charecter say "taste my big boner" over and over for about 5 minutes. Once your done with that you hop through a portal that takes you to the exact same sequence with a slightly altered landscape. Then after that you repeat the seqeunce for a third and thankfully final time. I can't fathom why they decided it would be good to put 3 badly designed turret sequence's back to back, but then again I'm not a developer. Unfortunately you are then thrust into a side scrolling level that although not bad, it is extremely boring. Then once again, your forced to do 2 more side scrolling levels that are only broken up by extremely short normal gameplay levels. Act 4 really leaves a bad taste in my mouth, and I'm really dreading going through it again on my second playthrough. Luckily the 5th act is arguably the best in the game.

Shadows of The Damned is hard to recommend from a value perspective. The game is about 7-8 hours and has no multiplayer, no new game+, and no replay value beyond just the core gameplay. However I highly encourage any fans of dirty humor to give this game at least a rental, or at least look up a few videos to gauge how well the humor meshes with your personality. Shadows is a game that screams of cult hit, and it's unfortunate that it will most likely be relegated to the bargain bin.

[Next up for reviews are Portal 2 and Silent Hill: Shattered Memories. Also I'm still looking for feedback to see if people would enjoy game deal blog entries on a semi frequent basis.]
#ShareonCommunityBlogs
Login to vote this up!