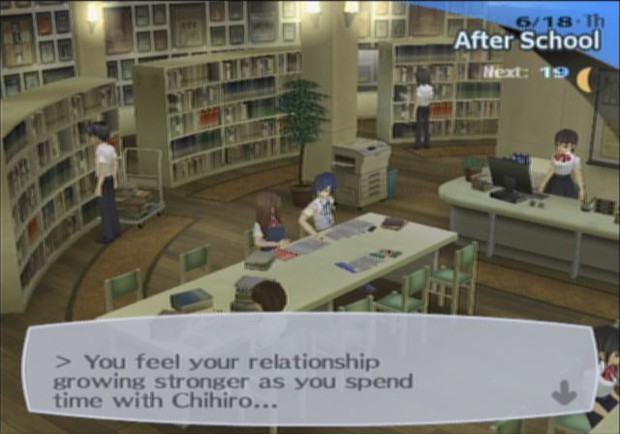 As I mentioned before, the aesthetics on display here are unique in their style. The sound design perfectely matches the odd anime style with some outstanding musical styling. The music basically correlates to locations and events, so you'll be hearing a lot of the same music as you go back and fourth from school to the dorm. Thankfully the music is great. You'll find a good mix of Japanese inspired hip hop and classical music with a few upbeat tunes thrown in. The soundtrack came packaged with the game and I will soon be ripping it to my hard drive for my personal listening pleasure. I'll have to dance around spoilers here but at a point near the end of the game the music takes a complete left turn and remixes all the sounds you've heard for hours into some great depressing songs. It's very successful at turning the mood in the game and is a highlight of the whole experience.

Persona 3 FES is a game with so many hours of content it's hard to fit it all in a short review. It's a game that takes a lot of typical RPG aspects and adds a ton of layers to create a very involving system. There are a few small flaws here and there but with the exception of your teams AI, nothing is to bad. I'm both a little sad and extremely relieved to have completed this game after a month of my life fell to my 98 hour save file. If you've got time to spare and enjoy RPG's give it a go, but know that you probably won't be playing many other games for a good long while.


[Unrelated note: I know there is a guy doing UK deals on the Cblogs but I haven't seen one for the U.S. That said I haven't been on in a while so disregard this if someones got it covered. Basically I'm wondering if anyone would be interested in a Semi-regular Deals blog that cover all the best deals from around the U.S. If you think it's a good idea please say so in the comments.
Thanks!]
#ShareonCommunityBlogs
Login to vote this up!