Final Fantasy VII IS Overrated...But Only Sort of 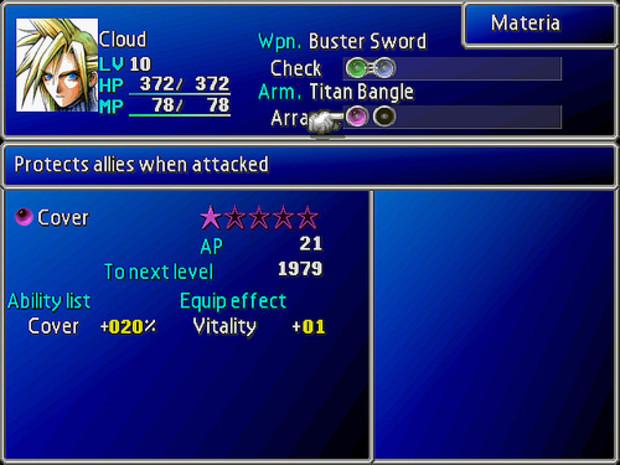 Except that there were only three equipment slots, and Materia made magic transferable to the point where all customization was non-existent. Yes, you could hunt to your hearts content for new Materia to your heart's content, but with 50% of them useless or unnecessary, and the rest requiring a dull level grind to power-up, consider me less than enthused. What about skill trees unique to each character? Or a job system like V's refined and improved? Even making the individual Materia become more powerful based on the number of times used rather than the number of random encounters fought would had added a much needed layer of complexity to an already stripped down battle system.

The spectacle of Final Fantasy VII's presentation and edgy story made these elements unimportant back when it first came out. But over a decade later we're left to struggle with them, wondering if newcomers should still pick it up, or if they wouldn't be better served moving on to later titles.

Final Fantasy VII IS in fact overrated, if by that you mean it receives bonus points for the context of its release rather than the content of the game. It still has a lot to offer, especially since the genre it inhabits hasn't evolved as much as others during the intervening years. But while the title deserves critical appreciation and gamer respect, its appeal has diminished with time and will only continue to do so, as other games continue to fill in the incomplete picture of an ideal RPG that Final Fantasy VII left many hungry for.
Login to vote this up!