An open letter to Gearbox regarding Duke Nukem.

I honestly doubt you're going to see this little community blog I'm posting, but I'm going to pretend you have found it and are now reading it. The reason I'm writing this is to give my opinions on Duke Nukem Forever, and also offer suggestions to make future Duke Nukem games better so something like Duke Nukem Forever doesn't happen again. I doubt you'll listen to my opinion, but as a gamer, and your customer, I at least hope you'd take some of these suggestions into consideration.

First off, I don't blame you for how Duke turned out. The game was in development with 3D Realms for what felt like forever, especially to a gamer. It was scrapped and restarted several times to support new technology. The overall concept transferred over each time, and in the long run you ended up with a mess of ideas, having to piece them together to make a "playable" game. I do, however, blame you and your head honcho Randy Pitchford for hyping the shit out of the game. Mr. Pitchford has said things such as "This game is so good you'll cum sparks like a 4th of July sparkler." and "When you're playing, you'll shit so hard it will rocket out of your ass and go up into space and orbit the moon, only for it to smear across the space station's solar panels and its orbit would decay, and it would fall down to Earth and kill thousands." I'd cite the source of those quotes, but I can't seem to find them at the moment. It's okay to be hyped to release a game like Duke Nukem Forever. But you also have to take into consideration that your opinion will be biased, and will appear biased no matter what. I hate using that word because it's thrown around so much, but it's truth. It would be like me shitting out a regular ol' turd and going "THIS IS THE GREATEST PIECE OF SHIT KNOWN TO MAN BECAUSE I MADE IT", when I know Peter Q. Shittington shits gold and diamonds. Plus, if you say things like how your game is going to be ultra amazing, it'll bite you in the ass in the end, much like it is now. We don't need another Peter Molyneux in the industry.

Overall, I thought Duke Nukem Forever was alright. Definitely not worth the wait, and not as good as it was hyped to be since PAX Prime 2010. If I were to score it, I'd give it a five out of ten. Right in the middle of great and complete crap. I was hyped up until the demo, which didn't feel right. Then the reviews came out and lowered my expectations a lot. And I think that may have actually helped me like the game more than I thought I would. The only reason I ended up playing it after the shitstorm of reviews was because I've been waiting for the game since I beat Duke Nukem 3D way back on my Windows 95 PC, and because Steam doesn't give refunds (as far as I know).

Pacing - The game was paced well enough to keep me moving forward. It didn't really feel monotonous and boring all the time.

Level Design - Most of the level design was cool. You'd walk through one area like it was nothing, but then when you are shrunken it's like a whole new level.

The Beginning - The first level was pretty awesome. That actually felt like the most polished part of the game, even if it was just a remake of one of the boss fights from Duke 3D.

Interactive Objects - I'm 50/50 on this one. Some objects were fun to play around with just for the hell of it. But making a point of having to find some of these objects to increase your health just felt like a way to elongate the game. Overall it's at least a neat way to give you incentive to look out for things you wouldn't notice if you weren't looking.

Level Design - While I said I liked the level design, I also hated it. Getting shrunk felt like it happened way too often, like it was put in just to help make the game longer. And all I have to say to the underwater parts is FUCK YOU.

Platforming - This kind of goes with level design. One big no no about first person shooters is not to incorporate platforming. Timing jumps in the first person just doesn't work that well. Plus there were so many times where I was small and had to avoid the floor because the water was electrified. And when I was normal sized, what did I deal with? MORE FUCKING ELECTRIFIED WATER. Seriously?! 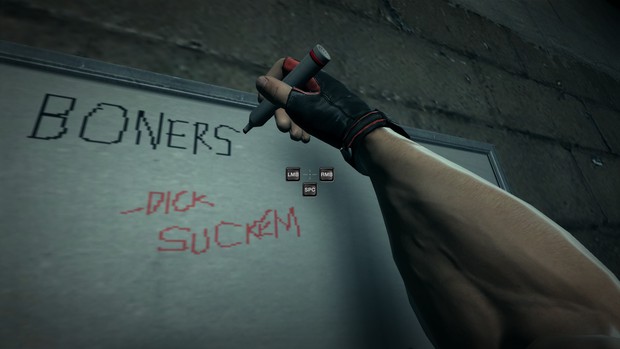