MacDonald asserts that, “when handled correctly, remakes, remasters and re-releases are an extremely good thing, both for the industry and for us.”

According to her, they are, “evidence of the growing maturity of gaming as a medium.”

Having an ever growing library of games to look back upon is definitely a sign of a maturing medium, but it’s not the cause. The maturing of the industry would occur regardless of the number of remakes being pumped out.

“The incessant push towards new and better technologies that has defined gaming for the past 20 years has begun to slow and developers can finally start applying what they've learned to older games whose abundant ambition was hamstrung by the inadequacy of their technology.”

True enough. Who hasn’t wanted to see their favorite classics given new life? But remakes, remasters, and re-releases are all very different things. Would I like a remake of Chrono Trigger? Definitely. Do I need an HD remaster of the title? Not really. Do I want to shell out another $10 to play it on PSN? Hell no. And there in is why most gamers decry the unending flow of remasters and re-releases (I don’t see any real remakes in the list of titles MacDonald mentions).

It’s one thing to argue that a developer meant to do so much more with a title, but was hamstrung by technology at the time. Or that the developer was pleased with what it accomplished in the first generation of a title, but now realizes how much more could be achieved with what modern technology makes possible. My point here is that simply rendering a game in HD, or polishing the polygons, is not enough. Has the sound been improved? The control scheme made vastly superior? Higher quality writing or better localization introduced?

Macdonald applauds the remastering of N64’s first Zelda title, claiming that, “For fans of a game like Ocarina of Time, the recent 3D remaster is a dream come true, a full realisation of a vision that was restricted by the N64's tight technological constraints.” 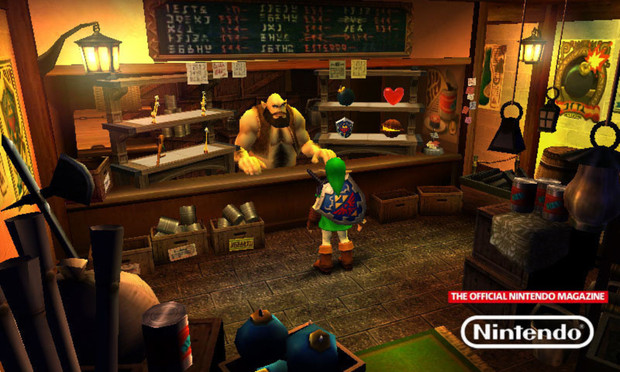 Now I’ll pause here and join Macdonald in her praise, because the 3DS version truly does improve upon the first version in many ways. With a screenshot to screenshot comparison, it’s pretty clear that the new Ocarina of Time goes a long way toward expanding the vision of the original, even if it’s not the “full realization” that Macdonald claims that it is. The idea that the 3DS remaster is the ultimate incarnation is shortsighted. Since video games are intrinsically dependent on technology for their proper expression, what makes this version of OoT the “full realization,” rather than a later remake or remaster in the future?

If, in five years from now on the 30th anniversary of Zelda, Nintendo were to release a large budget, fully remade Ocarina of Time with all the trimmings and a cherry on top, would that be an even fuller realization? In which case one might ask, “When does it stop?” And many would rightly reply, “Hopefully never!” But it does raise another issue.

In the realm of finite time and limited resources, when and how is it best for remakes to occur? Is the 3DS really the best platform to re-launch a touched-up version of OoT? Why not invest more time and money and showcase it on the Wii U (or the whatever Nintendo might have thought their next-gen console to be at the time)? Surely there was no pressing need to release a remaster as soon as possible.

Opportunity cost accompanies any of these decisions, so the question becomes, do I want to play an up-to-date version of game X, or a sequel to it, or something else entirely? While remakes, remasters, and re-releases can be great, it depends on how much is actually being changed, what is actually being improved, and whether or not gaming, individual players and the medium as a whole, would benefit more from the industry investing in something else.

I’ll finish by acknowledging the youngest among us, for whom Macdonald is rightly concerned,

“Aged technology is a massive barrier between us and gaming history, and what remakes and remasters do is take a sledgehammer to that barrier, making whole worlds of enduringly relevant older games accessible to modern gamers again.”

She puts this last part beautifully, and I do agree: remaking and remastering past gems so that they might be enjoyed again is a noble and necessary endeavor of any great cultural form.

But I’m left wondering, wouldn’t having a new Zelda title be better?
#Community
Login to vote this up!