Good Does Not Mean Fun

11:40 AM on 06.21.2011 (server time)    0
There is something that has been bugging me recently. I have a friend (don't all laugh at once) who insists that for a game to be good it has to be fun. Now, before we get any further, we need to define these two words otherwise I'll get into semantically based discussion which is beside the point.

Fun:
Minute to minute enjoyment. A perfect "fun" game causes the player to smile and actively enjoy it. Examples of this is stuff like God of War and Super Mario Galaxy, every minute is tightly scripted and designed to be a gleeful spectacle.

Good:
A game that one would consider worth at least one play through. Not a waste of time.

Now, as you can see, these definitions don't openly say one leads to the other. Some games are fun but not exactly good, The Force Unleashed is a great example of a fun game that just isn't good, the powers are gleefully chaotic and every level has an element of spectacle to it, but it just isn't good. Of course there are plenty of good games that simply aren't fun, Silent Hill Shattered Memories is an amazing experience and an absolute must play for Wii owners with a taste for it, but it isn't fun by any means. Interesting and intriguing of course but not fun in the slightest. 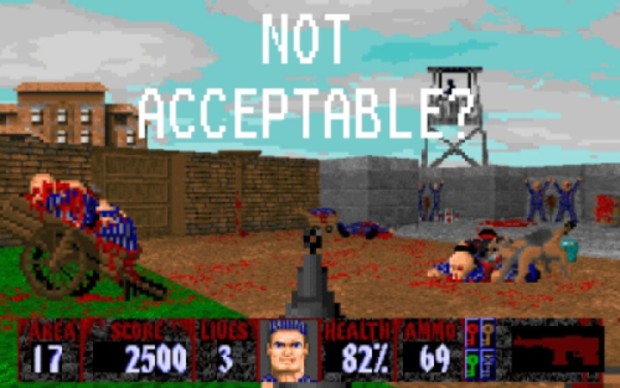 So why is it that every game is fixated on trying to be as fun as possible, and why is it we only associate games with fun? For example, there was recently a case in in the news of controversy over a Nazi death camp video game. The main issue seemed to be that many would consider the game to be "fun" and thus trivialize the event. But did it have to be fun? What if the game was just horrific and difficult? Would that be offensive? Surely a game where one feels powerless and vulnerable would get across the emotional horror of the event far greater than any film or book on the matter. But then, wouldn't many say the game wasn't a game at all, but an "interactive experience"? Some might even call it a bad game because it wasn't "fun".

Another, less controversial example of this is No More Heroes. NMH is, in many places, not fun. At all. It's even boring. But I still consider it one of the games that has influenced me most when it comes to approaching media and writing, don't be afraid to be dull. NMH is clever, because the dullness is deliberate and there for a reason; it's to parallel Travis' exciting life as an assassin with being a door to door handyman. You could even go one further and say Travis' day job is his real world and the assassin jobs are video games he buys (the whole game can been seen as a metaphor for the video game industry, but anyway). The over world is lifeless and empty, perhaps because that is how Travis views the real world, and the menial tasks you have to do are repetitive and dull because in real life they are. This is a perfect example of a game that is boring beyond belief at times, but still good but it uses it's dullness to juxtapose it's fun.

Gaming has to grow up. It has to stop throwing out big flashy blockbusters and proclaim them art. We need to see some games that are good, regardless of the cost of fun. We'll never find our Schindler's List or A Clockwork Orange if we aren't afraid to disquiet our audience at the expense of fun.

This post was originally published in Kotaku's Speak Up selection, but I'd like to give it a more permanent home here. It's been edited a bit to reflect some of the criticisms that met it and hopefully you'll enjoy the discussion held within.
#Community
Login to vote this up!

Hello, I'm Lewis, I'm a lot like you, only I'm probably not.

I got into gaming as a child, when I was handed the portable version of crack cocaine, known colloquially as Tetris. I would spend hours trying to make blocks form lines so they would disappear never to return. At the age of 8 I had my first existential crisis as to what happens to blocks that disappear. My desire to avoid death has since made Wario Land 2 one of my favourite games of all time, as Wario was immortal and this stopped me questioning my own mortality. Pokemon too fitted into this realm of immortal beings where only fainting occurred after heavy amounts of electricity as opposed to permanent void dwelling.

After I graduated from the philosophical quandaries posed by hand held gaming I obtained a PS1 and fell in love with games like Spyro, Crash and Rayman 2, a game so deceptively fucking terrifying that I have reoccurring dreams about the giant spider. And the king of nightmares. And the robot pirates. I don't care what any of you say, Rayman 2 is NOT for children.

I have a deep love of humour in games, with some of my favourites being no More Heroes, Brutal Legend, Team Fortress 2, Portal and Super Mario Galaxy. Sometimes I like to play bad games too, such as Alone in the dark, which is as hilarious as it is depressing. I have aspirations to become a writer, comedian and maybe one day game designer, but such things are simply the wet dreams of a desperate teen. Odds are I'll end up working in an office chewing on pens longing to go home and half write a blog.