6:25 PM on 06.20.2011 (server time)    0
Holy shit damn, what a huge year! 57 games! And yes, there was a Sega Genesis game released this year. This is also one of those awkward years where a lot of developers were jumping to the new systems while other ones were still very unsure and wanting to develop stuff on the PS2, GBA, and so on. Very interesting stuff. Well, let's hop in! 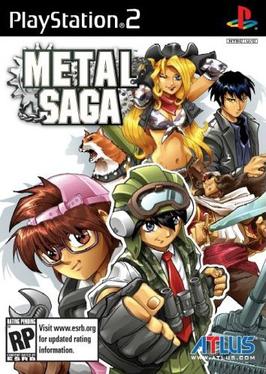 In many ways, Metal Saga is simply another run of the mill, generic ass title. And sadly, this is most likely the only FMV in the game, as I've played it fairly extensively and not found anything else (though that FMV alone kicks so much ass that Chuck Norris is silently nodding somewhere each time it's played). All the same, it's a game about tanks, wandering a post-apocalyptic wilderness, dogs with bazookas strapped to their backs, bounty hunting, crazy enemies, and just in general is a game that doesn't take itself too seriously.

There are so many possible side events that you'll often wonder if there's even a point to most of them. In fact, the game is almost too open world for its own good at times and yet, that's also part of the charm. You can literally end the game anytime by saying you don't want to be a hunter anymore, you want to get married, etc., and you'll immediately get a very quick gag ending. Fun, funny, and creative, this game deserves to be on everyones' shelves in my opinion.

What do you get if you combine Tales of Phantasia plus a dungeon crawler? This magical piece of awesome. You might claim with so many other great games this year that simply having something like this just isn't good enough to make a top 5 list, but OH how wrong you'd be. This game is addictive, has a fun but simple plot, lots of excellent features, plenty of depth, and is on a portable, which given everything I've just said makes it that much more impressive.

The original AI was a great game and started the trend of alchemy in modern gaming, however, clearly the best in the series was AI2. Firstly, they have a system very similar to that of Grandia and while it was somewhat duplicated in AI3, well...AI3 is kind of a mess. Second, the dual, separate worlds help establish an interesting pacing method and clear separation of goals, while still working together.

It's a little hard to explain, I guess, unless you've actually played it. Finally, you actually get to play with some FIGHTERS while the goddamn alchemist hits the bench. Why does this work? Because really, I don't see an alchemist as a fighter or even a mage. I guess it worked okay in the 3rd with Iris being a mage of sorts but technically an alchemist, but again, AI3 was a mess, so there you go.

I was absolutely addicted to this game for the longest time, which is quite a feat, all things considered.

Okay, okay...get it out. No really, just get it the fuck out. "lol 4 hour intro," "lol bullshit music," "lol nonsensical plot that doesn't really appeal to its core audience," "lol bullshit Sora X Roxas." I know, trust me, I really do. Now, look at just about any gameplay video. Now, remember worlds like Tron, the Timeless world, and the sheer amount of depth given to each area.

Love it or hate it, KH2 has a great combat system that has so much ridiculous, but awesome shit going on at once that it leaves you wanting more...until you realize S-E's just going to milk the goddamn series and not really bother making a 3rd one because they're assholes. No, the story doesn't make any sense. Yes, the whole Roxas thing is unnecessary and contrived. And at the end of the day, no, it really doesn't fucking matter.

KH2 was fun, at times challenging, and really did have great visuals and audio overall.

I hated Morrowind. I can't quite put my finger on why, but I just really did not like it. At all. But I spent almost as much time playing Fallout 3 as I did trudging the fuck through just about everything this motherfucker had to offer. Oblivion is an incredible game that's so great that once again, it's almost hard to pick out just one thing that the game has to offer and call it the best.

There are a ridiculous amount of side quests, lots of guilds, plenty of perks and questing for guilds, a ridiculous amount of history and culture, lots of hidden shit, and...well, maybe that's just what makes it so great: "optional." The main quest is not very long, but if you actually go around, explore, and just in general do shit, you will find yourself so lost, and loving it, within the game that it's absolutely unbelievable.

Honestly, I don't think it was until Fallout 3 that I felt that way again. Truly an incredible title.

This was a pretty rough year. Sure, there were some good titles, but there were so many blah and generic titles that it was hard as hell to come up with a top 5. Sure, I immediately flagged Metal Saga and Oblivion...those were obvious. But other than that, I had to go over the list several times to figure out just what the hell else should be on it. Again, that's not to say there aren't gems in the runner ups, but they're few and far between.