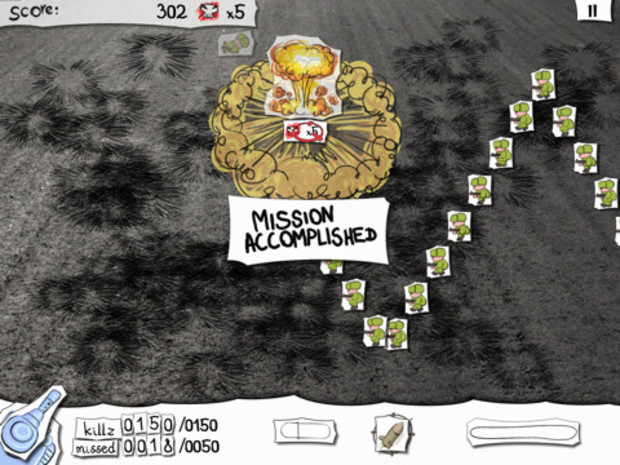 Sadly, for what initially appeared to be a silly, raucous romp through a bit of warfare turned out to be nothing more than a major disappointment. Paper Wars had the potential of being something very well executed on paper, pun intended, which could compete with XBLA titles such as Heavy Weapon. Yet, it flounders once put into practice, leaving many gamers at the very least frustrated and at the very most left with nothing more than a smashed iPad. I applaud the attempt of ‘making a bad game that’s so bad, it’s good’, simply because it’s so very incredibly difficult to make a game like that work, if not become a best-selling hit – as proven by Paper Wars – but sometimes it’s better to err on the side of logic that happily illustrates the simple creed that just because you can do something, doesn’t mean you should.

"I kind of miss the days when games were judged on their game-playing merit alone. I'm a little concerned about how far we (the game industry) are into the licensed four-page-ad marketing blitz era these days, which may be a natural evolution of the industry. But I'm always worried when we put more emphasis on glitz and production values than on the game. That's a trend that looks good for a while until you realize there's no game industry any more. If we don't have gameplay, we can't really compete with other forms of entertainment because we can't do graphics as good as the movie industry and we can't make sounds as well as the recording industry. All we can do that's special to us is be interactive. So we have to hang on to that and make sure we do a good job." - Sid Meier


Feel free to contact me with questions or suggestions