After the Fact: Fable 3 Review

5:45 AM on 05.31.2011 (server time)    0
I have been pretty behind on my backlog, and this week I recently decided to just plow through it as fast as possible. I have been struggling for something consistent for my blog, but I think I found something. I am going to start a new weekly bit called "After the Fact". It will be game reviews, but older ones, stuff I have yet to play and finish. It's not original, I know, but it will serve its purpose well. This week, I have finished Fable 3.

Fable 3 was promised to be the game of the century by Peter Molyneux, as all his games are. It was supposed to involve becoming king, refined combat mechanics, and a deeper story element than ever before. He said several times that he wanted us to have a cavalcade of emotions. The game fell infinitely short. 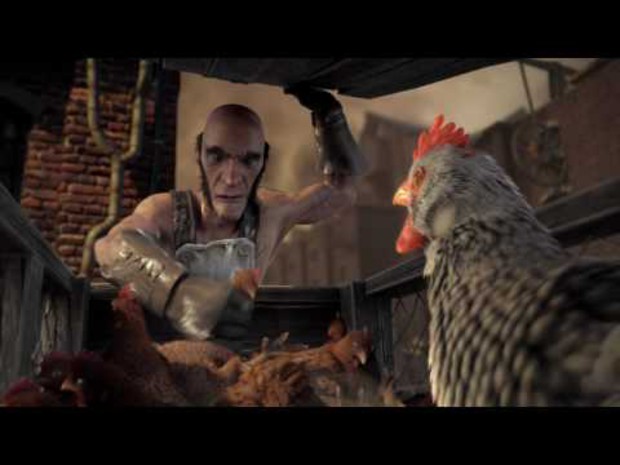 At least it looks pretty...

To sum up the story, the player controls one of two siblings, children of the hero of Fable 2. There is the "evil" son, Logan the king, and the "good" son/daughter, the player. Logan is described as an evil tyrant, imposing policies on the people that force them into poverty and suffering. It is revealed that the player is a "hero" like his father, and he/she is tasked with going to several different cities and villages and gaining the trust of the leaders of those areas by fighting hordes of enemies with usually a really big one at the end (as expected). After these leaders are acquired, they aid you in a revolution to take the castle. The king surrenders without a fight, and then basically informs you (for the first time in the game) that an evil darkness is coming to attack Albion, and you can either make the people happy, lower taxes, rebuild areas, etc. or be like your brother and force people into poverty in order to raise money to fight against the evil threat. You have a year from when you take the throne to prepare for the threat.

Here is the problem, though. There are apparently 6.5 million citizens of Albion. Every citizen costs essentially 1 gold to save. So, in order to save all 6.5 million people, you need to raise 6.5 million gold. To save 4 million, you must raise 4 million gold while the 2.5 million left will die, and so on and so forth. You can either be an ass and force people into work and to pay higher taxes, which will make them hate you but save more of them, or you can be nice and turn child labor factories into schools, lower taxes, etc. to give the people a good life but sacrifice bringing in a lot of money. You can also donate your own gold to the treasury to help save people, though making 6.5 million gold on your own is nigh impossible unless you leave the game on for a night or two (gold is not produced when the game is off, disabling the clock cheat from the last game).

In other words, Lionhead is essentially trying to force us to have an emotion by making us choose between being good and having tons of people die or being evil but saving most everyone. This feels like a cheap and lazy tactic when it happens. Why can I not have more control over my story? It is a weak attempt to wrap up the game. Why could I not have different groups of people (like in the first half) that I could recruit, and I can only pick a certain number of allies to get to help me defend Albion and they each have their own strengths? They could seriously have taken a lesson from Bioware's Mass Effect 2 in having multiple endings. Rather than give me control, it is more or less just trying to say "Oh, looks like a big morality choice is going to affect your end game! What are you going to do?". There is an achievement for being completely 100% good, and I don't care about these fake people, so I am going to go that route. There is no dynamic factor to the story in the 2nd half whatsoever. They tried too hard to make it emotional. Anything would have been better than the extreme linearity and forced emotional response that they chose to go with.

The combat is pretty much a clone of Fable 2. Y shoots your gun, X uses your melee weapon, and B shoots your magic spell. You can hold any of them to charge them up. This time around, you can get an upgrade that allows you to have two magic attacks at once (e.g. Fireball and Force Push create a strong fireball that knocks enemies back, or Vortex and Ice Storm will create and ice tornado, etc.). This can be fairly useful, though it doesn't double the damage of the spell, just adds to its duration, distance, effects, etc. This was actually a nice addition that encouraged the use of magic more often. The combat has a whole, though, is stale. There are no combos or anything rather than spamming the same attack over and over again until something dies. Blocking requires you to hold the X button, and the enemies move so fast that by the time you stop blocking to attack them, they have already started another attack themselves, and EVERY enemy attack will cancel out your attack no matter what. It is a major balance issue. It is tiring and very stale. There are also a lot of sequences that were modified in very cheap ways in order to fill space. These moments and battles can be annoying and quite boring.

In order to get upgrades of your melee, ranged, or magic weapons or to unlock things like new magic spells, expression packs (e.g. a "Mean pack" that lets you growl or yell at people, a "Parenting pack" that lets you do expressions with your child, etc.), and other world features (e.g. the ability to buy houses, the ability to buy businesses, different levels of jobs, etc.) are bought and unlocked in an area called the "Road to Rule". After each person recruited in the first half of the game, a new areas unlocks that has 5-6 chests with these upgrades in it that you can purchase using "Guild Seals" which are earned by doing favors for people (fetch quests or escort missions usually), and a small number is earned from combat. Frankly put, this sucks. The ability to buy businesses is not made available until half way through the first half. If I have enough gold, I should be able to buy a house to rent out or a pie stand to make money on. Second of all, these guild seals are annoying to earn. They are completely boring missions that equivocate to "go get this, bring it back" missions. Third, why do I have to buy expressions? That makes no sense logically.

The next point I want to mention is what is called the "Sanctuary", A.K.A. the solution to the menus from Fable 2. Basically, every time you hit start, you go to the Sanctuary, and you can walk into your armory (to change weapons), dressing room (to change outfits), "Sanctuary Shop" (to buy DLC), a portal to save your game, and last and definitely least, your map. The map is a little circular diorama of the Albion world. You can select it, then it shows all 10 or 11 cities/villages, and you can zoom into them to either fast travel or select a quest or building in the city for your yellow glowing trail to point you towards. Here is the problem: the map is a total pain to use. Finding things are difficult, and nothing is to scale. It looks like a 5th grader's geography project. It is awful. There is also no icon for what would essentially be "You are here", so you have no idea where you are in relation to your objective. This can cause many headaches, as fast traveling does NOT mean you travel to within 100 feet of where you want to go, but rather you travel to the extreme edge of an area and have to hike to where you need to go. It is tedious and boring. The times when I quit playing were when I was about to have to travel across an area and decided I was too bored to do that, so I would cut off the game, play Mortal Kombat, and pick it up the next day when I had more patience. Overall, the Sanctuary is laggy and it is really just as big of a technical hassle as the menus were in Fable 2.

The game is rendered nicely, with wonderful backdrops and lighting effects. However, it stutters quite a lot, sometimes right in the middle of combat. The camera isn't terrible, but there were several times where it got in the way.

The Sanctuary issues compared to the menu issues from Fable 2 cancel each other out. No really improvement nor hindrance there. The map is worse, causing confusion and headache. Combat is the same, though the dual spells tweak is a nice addition. Enemies are the same ones from the last game, with the addition of the evil darkness people at the end. The story starts out pretty well, but I could not overlook the ending. I would even maybe suggest just playing the first half of the game. I will add that the final person you must recruit in the first half (the last "mission" before taking over the castle) is brilliantly done. It involves your first encounter with the darkness that is threatening Albion. Story and presentation wise, it is outstanding. It is not overly frustrating of a battle, either. The first half finishes strong, but the second half was mediocre at best.

Should you buy it? At $20 or less, absolutely. The first half is a good 7-10 hours in length and is pretty good. It is about the same as Fable 2, if you liked it. The second half is, again, mediocre. It is not worth the full retail price tag.
#Community    #reviews
Login to vote this up!