12:47 AM on 05.26.2011 (server time)    0
According to my Gamefly queue, I was shipped Dissidia: Final Fantasy nearly a month ago. I only got around to popping it into my PSP last night, so clearly, I was just dying to play it. I was even more excited when I got through the tutorial and had come to the very firm conclusion that I was not going to waste my time with any more of it. 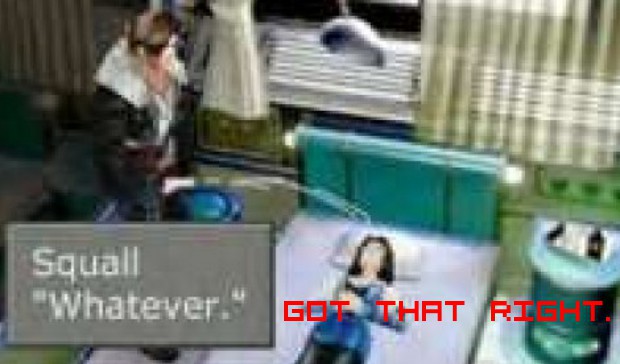 It's kind of sad, really. The Final Fantasy series and I go way back. Even before I had an NES of my own, I remember flipping through my friend's issues of Nintendo Power, reading the game review and all sorts of hints and tips for a game neither of us had. I spent some time with the game while my age was still in the single digits, but it was a bit too difficult and/or incomprehensible for such a wee lad, so I went back to trudging through Zelda II and grinding away in Dragon Warrior. As the years went on and I became a bit more bookish, a bit more lonesome, and a bit more husky, Final Fantasy II (nee IV) caught my eye, and I loved all the characters and story involved, enough to blow through it twice and revisit the series' origin and conquer that as well. Final Fantasy III (nee VI) came along and I loved that as well, enough to find ways of playing Final Fantasy V in English long before it was released on one of the Playstation compilations over here.

To shorten the telling, I've spent good chunks of my life with I, IV, V, VI, VII, and VIII of the core Final Fantasy series, solid expeditions in Tactics and Tactics Advance, and even fond memories of Mystic Quest (mostly, in that case, of Tristam's theme). I gave all the VII spin-offs the old college try, loving the movie and Crisis Core (because Zack Fair is my future manwife), and stubbornly plowing through a couple of stages of Dirge Of Cerberus before getting fed up, and I recall several fun rounds of Crystal Chronicles back in the Gamecube days. Hell, the sole reason I gave Ehrgeiz a chance was because Cloud, Tifa, and Sephiroth were unlockable in it.

And I just can't do it anymore. I have a playthrough of IX everyone and their mother's dog's uncle's girlfriend's cousin's landlord has told me I need to finish, and XII seems right up my alley, given my love for the Ivalice setting (as do Tactics A2 and Revenant Wings), but it hurts just thinking about playing any more. Between watching enough of X to realize Squenix's characters were starting to become harder and harder to care about, watching X-2 violate all the previous tenets of their never being direct sequels to Final Fantasy games, having no interest at all in paying to grind in XI, and feeling abject horror at just the reviews of XIII, the series' place in my heart has faded quite a bit.

Honestly, going back to any FF game feels much like the prospect of meeting with an ex from a bad break-up for lunch years later, "just to talk." There's this impending dread of either getting back into something you don't have the time or want the trouble for, or that things will just devolve into a rash of shit again, no matter how many times you remembered your anniversary or how long you spent sucking spells from zebra-unicorn things out in the tundra to combine them into better spells and rip through the rest of the game, scot-free. Despite my good memories, I don't even want to consider spending time with tie-ins to the games I really loved, like FFIV: The After Years.

Granted, it's probably not just the games' fault. I've grown up quite a bit since my more frequent flirtations with JRPGs, and their SNES heyday. I work two jobs, so I don't have the time to dedicate to all that leveling and grinding. If I'm not working, I'm usually catching up with workouts, chores, and time with friends, all of which tend to get backburnered once things get really busy. And when I do have time to game, I've got five systems plugged in to my TV that can play eight systems' worth of games (not including downloadable content), handhelds that can handle four more systems' worth, and an Alienware with a Steam account that did pretty well during the most recent Steam holiday sale. Suffice to say, I have plenty of reasons not to be wasting my time with a series that's long past its prime.

That doesn't leave SquareEnix off the hook, however; were their games still compelling, I'd be more than happy to make some time for them, but that just doesn't seem to be the case anymore. I mentioned it in passing earlier, but one of the things that made so many of the past Final Fantasy titles great, but appears to have fallen by the wayside, is the character development. Every single FF story has been nothing short of epic, but as the years wear on, the characters that filled those epics and drove them to such moving, memorable conclusions have become more and more watered down.

I mean, just look at the illustrations, across the board, of FF characters, and compare the impressions you get from the classics to those you get from more recent appearances. I'm not even talking about an Amano versus Nomura thing, either, because FFVII and even VIII stand up to this test a bit. You look at young Rydia, and you can see she's sort of a lost little girl. FFIV's Cid is clearly strong and good-natured, perhaps even jolly. Palom and Porom look like little pricks. Moving on to VI, Locke's clearly a little bit mysterious, and probably full of boyish charm. Gau seems decidedly feral, Sabin looks like a scrapper, and Edgar looks regal and responsible. A good look at Cloud Strife makes you wonder if he's hiding something behind that combat-ready exterior, Barrett is pretty fatherly looking for a guy with a gun at the end of one arm, and there's obviously something dark about Vincent Valentine. Squall also has the mysterious protagonist look going for him, albeit that he looks like he has no clue what his mysterious secret happens to be*. Rinoa looks like the pointless girlfriend type, and Zell Dincht comes off as the kind of guy who doesn't afraid of anything.

IX's characters are all such great takes on FF staples and unique in their own way (much as the game they star in was) that they don't even need mention here, and then you get to X and you're presented with Twat, Troubled Girl, Wise Old Dude, Douchehat, Goth Chick, and Bubbleslut. That gets a follow-up, they introduce Other Goth Chick, and she, Troubled Girl, and Bubbleslut just get superslutty. XII's cast seem to have a little more personality at first glance, though they all seem to be repping different angles on How To Leave As Little As Possible To Guess About One's Figure, and XIII's characters just seem like straight up stereotypes. Wiener kid? Check. Tough chick showing some leg? Check. Other tough chick showing some leg? Double-check. Goofy meat slab? Yup. Scantily clad, cheery jailbait? You betcha. Black guy with some joke tied to his obligatory afro? Check-a-rooney! I don't want to learn anything more about these characters, because they feel as if the book can be judged by its cover, as much as I wouldn't mind grabbing Vanille by those pigtails and... pardon me. I'm getting inappropriate.

In short, Final Fantasy lost me when good writing and good characters got shunted aside for the sake of fanservice and prettiness. Given how willing I was to do even the most inane things, like breed a rainbow's worth of chocobos or try to find a rat's tail, never mind the scads of unnecessary side bosses I've taken down over the years, that's a long way for a series to fall. At least Rydia and I will always have vaguely effective castings of D. Mist, and that long-ass fight against Asura where you cast Wall on her so she heals your party whenever she tries to heal herself. Call me when you come up with another Cid players can give a rat's ass about.


* - To be honest, I'm not even sure what the hell was going on with that whole Lionheart thing at the end, either. So he's a summon? His necklace is a summon? What?

PS - I'm pretty much in the same boat with the Kingdom Hearts series; loved the main games, even bothered with the card game when it was on GBA, but unless they release a Kingdom Hearts III or someone manages to really sell me on 358/2 Days and whatever other franchise-milkers they've thrown to the ravenous hordes, I'm out.
#Community    #Rants
Login to vote this up!