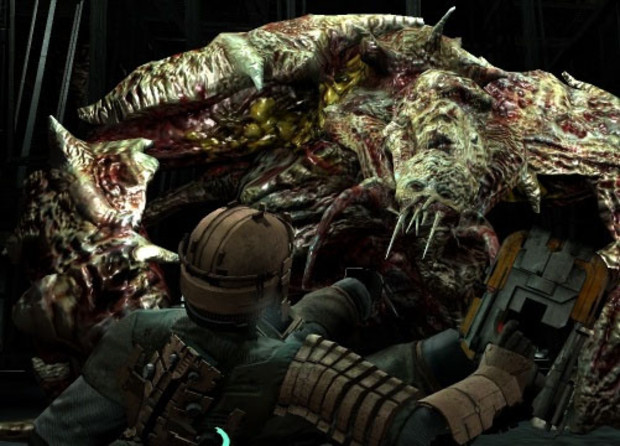 This won't end well for our good friend Isaac

The sound design in Dead Space really seal the deal on the whole experience. Random shuffling and odd mechanical background noise will constantly have you turning around, looking for an invisible threat. So many little touches in the sound effects up the horror considerably. Let me tell you when you walk through a deserted corridor and start hearing someone chanting the ABC song so softly it takes you a second before you realize what your hearing, you will not feel comfortable. The music reinforces this by ramping up during fights and being non-existant when enemies aren't around. The miniamlist musical score in Dead Space really helps set the tone, and doesn't dissapoint.

I bought Dead Space over a year ago and it has been sitting there unplayed up til now. A few days ago when I poped this game in I wasn't expecting what I got, one of the best survival horror games I've played. I can tell you now that it won't be long before I get my hands on the sequel, and I'll probably be eagerly awaiting the announcement of a Dead Space 3 before long. Even if you aren't a huge fan of the horror genre, I'd definetely reccomend picking this game up. The gameplay is solid fun, that combined with the atmosphere put this game over the top.