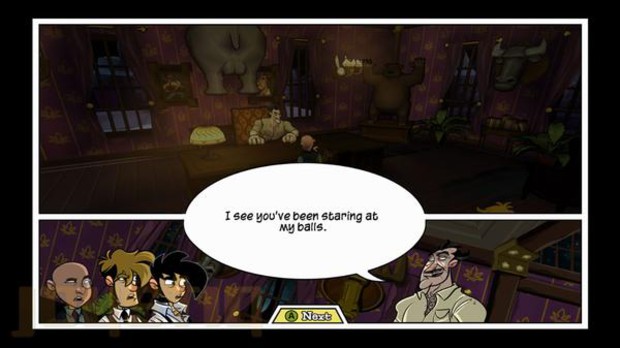 Expect more humor in the vein of dick jokes with class

The story in this game is basically just an excuse to go on hilarious adventures such as exploring an insane asylum and fighting with monkey robots. While the story is simple at best, the dialouge will have you rolling on the floor as soon as the game starts. I guarantee you will ROFL and LOL on multiple occasions(unless your heartless, in which case you have my condolences). The first opening lines where your friends try to convince you to help them are among my favorites, I never thought I'd ever laugh about a rake, but I was dying within a couple of seconds of dialouge. Although, it is important to point out that only a few lines of dialouge are actually spoken, so expect to read a lot.

If you are a fan of RPG's you wont go wrong, but the battle system is definetly not what you'd call complex. If you've never played RPG's, this is an excellent entry game, as it's simple and relatively easy, but not without a couple of challenges. Penny arcade 2 is a great if not simple RPG with hilarious dialouge that will have you laughing all the way through