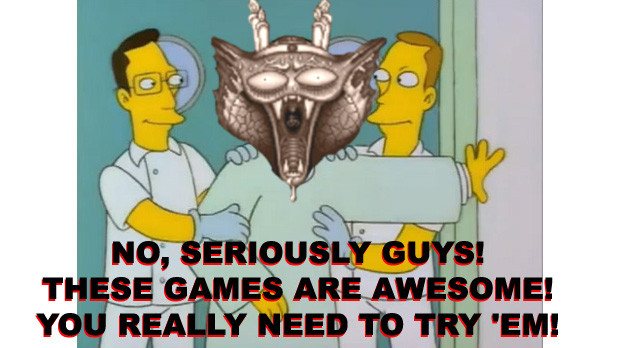 Oh, but before I go, just one or two other things I’ll note quickly about what’s been happening in my neck of the woods.

When I first announced my semi-departure from blogging here, I mentioned that after months of unemployment (which was, incidentally, the catalyst that got me blogging in the first place), I’d managed to find a bit of work: part-time, but steady. In case you’re interested I’m still at the same job, and saving up for a sorely-needed replacement for my current car: it’s hardly an ideal position to be in, but it’s definitely better than where I was, so I’m glad to have managed to hang on as long as I have. Hopefully something better awaits, but for now this is it.

I also, to Wry Guy’s horror, got picked up for a seasonal gig at Gamestop this past holiday season, and they’ve kept me on since then to fill in various scheduling gaps: retail work is retail work, of course, but it was handy to have that employee discount when I was picking up all those new releases earlier this year. As with any such job there are countless stories to relate (even with my limited hours), but they’ll have to wait for another day.

Finally, as I mentioned earlier, when I first announced that I’d be stepping away from this blog for awhile, I said I had other projects on the back burner: believe it or not, while I’m still working my way through the list, I have actually managed to finish a couple of them. You might have already noticed a few of them in the sidebar, but here they are in case you didn’t:

First off, I’ve done a bit more work for Racketboy, which offered me my very first “published” writing gig a little while back – as with my previous two projects, this one is a system-based shmupping guide, though I’ve shifted my focus from the 32-bit systems to the PS2. Did you know that such an “uber-mainstream” system actually has one of the greatest scrolling shooter lineups ever? Have a read and you may well be surprised! I’m currently finishing up another project for the site…keep an eye on that sidebar!

I’ve also managed to get myself a new outside client, namely Hardcore Gaming 101, home to a whole slew of articles on unusual games. Once again, my initial contributions to the page are shooter-related: specifically, we’ve got Deathsmiles, which was just recently released in Europe, and Espgaluda, whose second iteration was ported to iOS around a year ago. Both of these articles need an update, which I plan to do soon, but if you’ve ever been curious about those two series (or others; several shmup-centric posts by other writers have gone up there lately), hopefully these bits will tell you most of the “essential” stuff. I also hope to do more work here at some point; I’ll keep you posted as best I can.

Guess that’s about it for the time being. Hopefully you didn’t mind my catching up with you all a bit, as I’ve enjoyed getting back in touch with the community, if only for a short (by my standards, anyway) time: I don’t know when I’ll be able to blog here next, but until then you can rest assured that I’m still gaming and writing away, among other things. ‘Til then, see you around the comments, on the forums, or wherever. :)