5:58 AM on 05.14.2011 (server time)    0
I've been playing Dark Void Zero lately. I managed to find a use for my PS3 controller and mapped the buttons to keys on my keyboard so I could use it to play DVZ but gadzooks is it difficult! I've played it for 3 hours collectively and I still haven't got past the boss in the first area. The only achievement I've managed to unlock successfully is n00b!!. 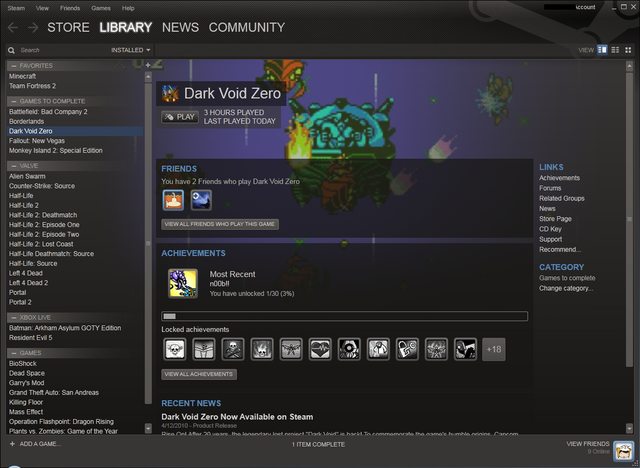 This got me thinking. Is this game really as hard as I think it is or have games just gotten easier these days? I remember playing games like this and being able to fly them but now I can't beat the first level on easy. I suppose it's common knowledge that games have become collectively easier in recent years. I'm not sure if that's a good thing or not but looking at the facts it seems like a good thing. Back during my Sega Mega Drive days, the ratio of games owned:completed was pretty bad. That was partly due to there being no built-in save function and partly due to the difficulty of games; even on easy.

What makes games so much easier these days? Well I think one of the biggest attributing factors is the unlimited retries. Since saving was introduced (and made even easier/streamlined with auto-saves), you'll find that if you keep trying you'll eventually beat that pain-in-the-ass boss. With these "old-school" games, if you can't beat the boss after X amount of lives and Y amount of continues, you're out of luck. You have to start again from scratch and that is really frustrating. DVZ captures this frustration perfectly but also gives you some leeway by way of checkpoints. Apparently there's also a save system after each level but since I can't beat the first friggin' boss I've yet to encounter it. One day you mech mother-fucker, one day.

I know DVZ is actually a recent game, so that kind of contradicts what I'm saying, but it's emulating an older platform and capturing the old style of gameplay so it still counts the same.

What do you think? Do you think games becoming easier to beat is a good thing or a bad thing?
#Community    #Retro
Login to vote this up!