A Game That Mirrors Destructoid

4:48 PM on 05.13.2011 (server time)    0
As I mentioned in a previous blog post, I recently bought Shadow of The Colossus (SoTC). At the time I was up to the third Colossi, and I greatly enjoy the game. Now, I’m almost done with the game, and I have mix feelings about it. Mixed because of the repetition the game offers. Mixed because I think this game would have been better as a short game.

In films and literature we have short, more condense versions of said mediums: short films, short stories, short novels, etc. One of my favorite writers that explored the art of the short story is Franz Kafka. When you read any of his short stories, or unfinished novels, you notice that he spares no words - everything has a meaning. Now, can games do the same? A couple of weeks ago a Dtoid user by the name of bbain wrote a blog entitled 5 Freeware Indie Games You Should Play: Batch #6. In this blog he recommend a game called Digital: A Love A Story (DALS). If you click on the link I so kindly supplied you with, you would find comments from an excited Venus. I fell completely in love with this game, and couldn’t control myself – bbain helped me find one of my favorite games ever. Digital: A Love Story works because it’s ambiguous. It works because of its minimalism. It works because it’s short. SoTC is very similar to DALS in the sense that it’s trying to convey a message and story without directly explaining it to its players. In other words, they’re not insulting the intelligence of the gamer – you have to fill in the blanks. DALS accomplished its mission in a span of four hours. 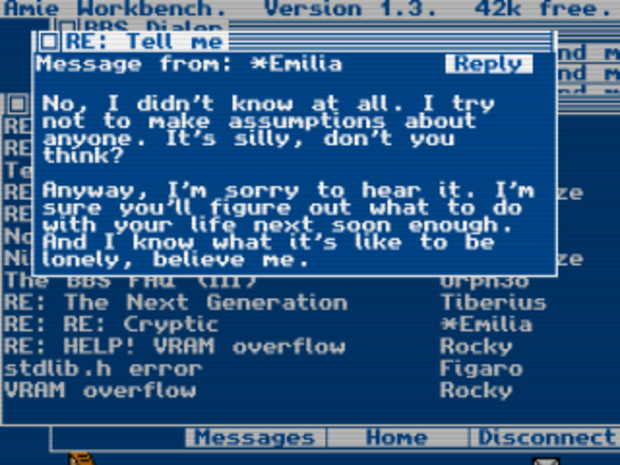 In one of many replies to me, bbain said, To me, it's kind of like an emulation of the way we communicate on sites like Destructoid, although in the game you only had someone's screenname to go off of rather than avatars and bios. You can create such a strong connection with people you've never even met and have no idea what they look like. I couldn’t have said it better myself. This game is scary in how accurate it is. We, as a community, have fights, debates, or even insult each other, but playing this game showed me a connection I have with the words of other Dtoid users; words that sometimes are meaningless when I interact with people out in the world.

Like I said before, this game is short, but that isn’t a bad thing – a game like this can only be made short. I wrote three paragraphs explaining the story and characters, but decided to not include it. The whole point of the game is the words, and if I ruin the words for you, then there is no point in playing. Please, go over bbains blog and follow the link to download this little gem for FREE.
#Community    #Rants
Login to vote this up!