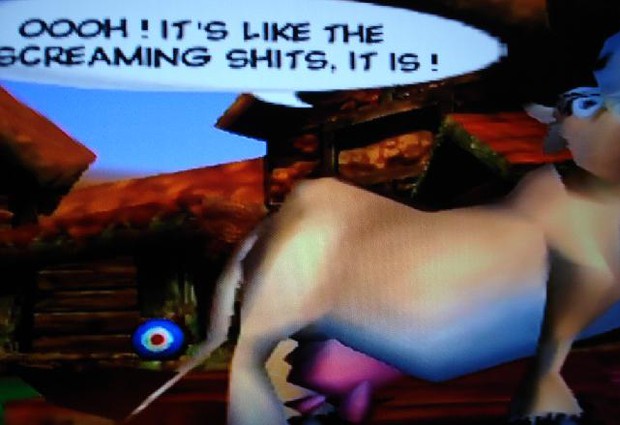 Context sensitivity works as the stepping-stone to each of the nine chapters in the game. It is the only way to move forward and is either the start to or finish of a mission. Whether that is to take some effervescent tablets to clear Conker's hang over, or whip out an M16 to dispatch an army of Nazi-esque teddy bears.

The single player adventure of Conker's Bad Fur Day has close to nine different themes that go along with each of its nine chapters. In the chapter Barn Boys, you will find yourself interacting with a pitchfork that helps you fight a robot haystack. In Sloprano you'll find yourself rolling up poo, fighting a poo monster, and having fun doing it. It is a toilet humour filled adventure riot the whole way through. It is silly but the gameplay is taken seriously.

Multiplayer is a big part of Conker's Bad Fur Day. The modes are Beach, Raptor, Heist, Deathmatch, War, Tank, and Race. Some of the multiplayer modes have a few different game types to mix things up, all of which are well done, with one exception. The Raptor mode has one playing trying to steal eggs and the other player operating a raptor that is set to defend and devour the opponent before they can capture enough eggs to end the round. I found this mode to be unbalanced as raptors have a steep advantage in speed and attack power. Beach has you trying to either infiltrate a fortress or defend it. Heist is a moneybag centered capture mode where third person shooter combat plays a role. War puts squirrels against Tediz on a very well put together battlefield with gas chambers and flamethrowers at your disposal. Tank, a vehicle based combat zone is nicely fleshed out with power ups that dot the landscape and interesting game design. Race, puts you on a jet propelled hover board over a river of lava where you race to the finish and try to take out your opponents. With the seven modes available I found I was mostly playing the WAR' section, Beach, and death match. The beach mode is exceptionally entertaining against CPU drones.

In addition, this game has a cheat codes section that allows you to unlocked new playable characters in multiplayer. A personal favourite being Greg the grim reaper, the guy who introduces Conker to the concept of death within his world.

Conkers Bad Fur Day is a big game. It is unfortunate if you have missed playing it. Perhaps that was the motivation for Rare to do an XBOX remake when Microsoft purchased them. The upgraded version of Conker's Bad Fur Day for XBOX had an incredible graphics upgrade. All of the fuzzy creatures were actually fuzzy this time around. The polygon counts in most places were multiplied several times over adding incredible detail to an already detailed world. However, it was lacking the exceptional multiplayer modes, replaced Conker's frying pan with a bat, and several other fine details were left out as well. Notably at the start of the game on N64 conker has a glass of milk in his hand. As he sips it, it wavers towards him, fully rendered and animated to a few frames. On the XBOX version of Conker's Bad Fur Day, conker does not even so much as move his arms, his glass is a goblet, and remains stationary at his side. It is a subtle hint that it is not the same game and that some things will be missing.

Graphically this game can still stand. The real time shadows, lighting, and animations seem to barely age. With that said, the frame rate, the two-dimensional decals, and the video output quality have not aged well at all. At the time of Bad Fur Day's release, these things were probably unnoticed by the technology of the time or completely overlooked.

Perhaps it is the nature of the stylized cartoon world, but this game does not seem to be aging, save for a few aspects of course. This is one of the greatest advantages of stylized video games.