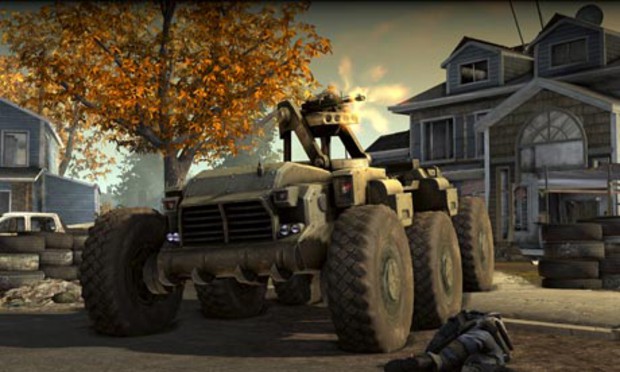 Goliath is the highlight of the game.

The story will take you on a trip to undermine Korean authority on the West Coast of the United States. You and your group of resistance members are on the hunt for jet fuel to supply the army stationed in California. In order to remain spoiler free I won't point out any specific setpieces but I can say with certainty they are excellent and will keep you going through the story at a good pace. One moment in particular Really put me on edge and as I watched it I honestly felt a uneasy, which I believe is a good feeling to get from a game. It was honestly shocking and I can't believe Fox news did'nt take that moment and run with it.

Graphically, Homefront seems slightly mediocre in 2011. The games looks good but the overall texturing reminds me of a game that might have come out in 2008. The art style really makes up for it though as the enviorments capture suburban America perfectly, everything is laid out realistically. It doesn't feel like these enviorments are made for a game. Charecter design is fairly good as there are only 4 main charecters and they all feel disticnct and are backed by solid voice acting.

With solid gameplay and a fairly unique and touching storyline, Homefront slices out a niche in the FPS market. The ony thing that holds this game back from being top tier is it's length. Clocking in a just over 4 hours the campaign is far to short and the gameplay isn't good enough to make up for it. Even if you bump up the difficulty and scour the landscape for the games collectible newspapers, I doubt you could get more then 6 or 7 hours out of it.

Homefront is a game of the edge of greatness. Unfortunately the games length holds it back and plummets the games value proposition. Keep in mind that there is a full multiplayer which I didn't play but as a purely single player game it is just out of reach from the "short but sweet" section of games. If your into multiplayer this might be a game worth picking up. If you are looking for a good single player shooter then I would suggest either a rental or waiting for the game to drop to the sub tweny dollar range.