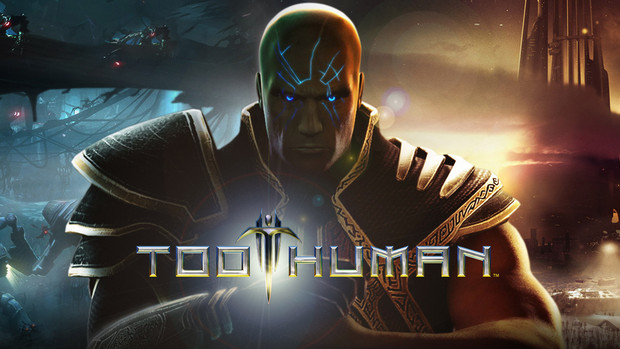 
Norse mythology with a techno flair

Too Human is a game 9 years in the making. First concepted as a Playstation game in 1999, It's come a long way for a release on Microsofts Xbox 360. Is this first entry in the Too Human trilogy worth the wait?

Too Human starts with a rather stylish intro video that throws you into the tech flaired world of Too Human. You are Baldur, son of odin and resident of Asgard. As an Aesir it's your job to protect humanity from the machines that plague the modern world. Without much fanfare you are thrust into the first level of the game and meet your first machine.

The world of Too Human is extremly well realized. The blend of Norse mythology and Cyber technology is surprisingly well utilized and lends itself to the best part of game, the story. As Baldur you must hunt down the robot GRNDL. Of course the story doesn't end at GRNDL and soon begins to lead you toward your ultimate enemy Loki. Unfortunatly the story is just set up for the now defunct Too Human trilogy and thus feels like the opening to a story that will never be finished. In the end it is a well told story accompanied by stylish cutscenes and solid voice acting.

The meat of the game is of course the gameplay. You choose between 5 playable classes that each empasize a certain playstyle (i.e. rushing, tanking, healing, etc.) No matter what you choose you will end up using a combo of melee weapons and guns to dispatch your foes. Your melee weapon is assigned to the right stick which will be used to slide towards enemies for basic melee attacks or to pop them up for a quick air combo. The choice of the right stick as your melee simultainiously works well and frustrates. It seems somewhat randomly Baldur will not slide corrctly or will end up targeting an enemy you don't want it to. Guns will help you thin out the horde before they descend upon and do there job well, but once again you will encouter some fairly janky targeting that could leave you out in the cold. Also at your disposal are ruiners which are essentialy AoE power moves that are useful for getting out of a tight spot or taking out a large group of enemies. Too bad the level design and enemy types completly ruin the experience. Most of your battles consist of large waves of machines that can either be rushers or long range spammers. Enemies take a surprising amount of punishment and also frequently come with exploding, poison, and freezing death AoEs that can severly screw you up. It seems like the game sometimes sets you up for failure as when you die you just come back with all the enemies at the same health as they were before. The only punishment you get is an infuriating 20 second cutscene of a valkyrie descending from the heavens and carrying you up to valhalla. It's cool at first but after 2 or 3 deaths you'll switch from mild interest to anger. For a loot driven game its surprising that the developer would make the game so difficult. Loot driven games are known to be kind of mindless but in Too Human you die so frequently you start to lose interest. Not to mention you'll be wrestling the camera constantly. The only thing that make it bearable is the fact that left bumper will center the camera, expect to be hammering that almost as much as your melee attacks.

Graphically, Too Human is the definition of mediocre and would probably fit in as an Xbox 360 launch title. On top of that the framerate is prone to chopiness and glitches are frequent. Sometimes enemies will suddenly stop moving or even become invisible. I personally lost about 10 minutes to an unopenable door which was only solved by reloading the game. Artistically the game remains consistent with it's sci-fi vibe with solid charecter design and and consistent enviorments.

Too Human is a flawed game that tried to create a new style loot grind and failed spectacularly. The only somewhat reedeming quality of the game is it's narrative and even that isn't specatcular, just well told. The game itself is a boring grind punctuated by an annoying death animation and absolutly absymal camera control. With only four levels and about 10 hours of gameplay in the main story the game will end fairly adbruptly and leave you hanging with only the grind of the same 4 levels for mostly useless loot to keep you going. When I finished this game I didn't feel any accomplishment, I only felt like I wasted 10 hours of my life.