Aaamaazing: It's all Spatial Effects

7:55 AM on 04.29.2011 (server time)    0
Dedication. I am dedicated to video games. When I was young and my father suggested I go outside, I said NO, I would rather finish playing Battletoads. When my mother asked if I would like to get some of the hottest new releases from the local video store, I said NO, I would rather hire Super Mario Bros 3 for the 19th weekend straight, because I know I can get past that stupid ice world this time. When my friends asked me to come over to hang out with them, I said NO, you should all come sit on my couch and watch me play all of Eternal Darkness. And please bring your own snacks, I am not a charity.

Through the years I, like many others, have played a lot of games on a lot of different machines. I thought that I’d peaked, that I had become as obsessive and anti-social as I possibly could, short of hooking living human babies to my TV as a power source. And then there was Mass Effect 2. 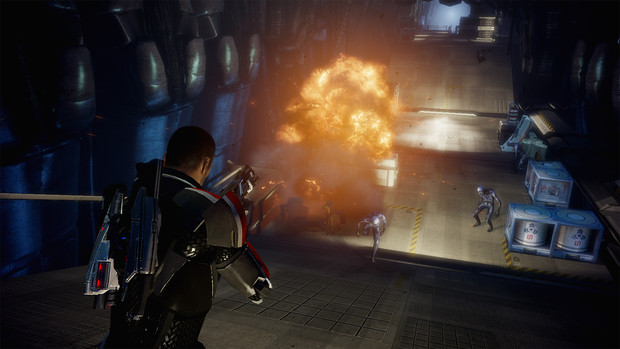 If I stop playing now and go to sleep I should be okay, but I’m playing Mass Effect 2, I can’t stop. My brain does a quickfire calculation, weighing up the risks and rewards of playing a video game for so long that I go blind. The game wins of course. And now I’m half-disabled, squinting at my tiny television as I fire orbs of psychic ass-kicking into the brain pans of defective clones and colour-coded gang members. My head starts pounding so hard it actually puts me off balance. Mass Effect 2 is now actually making me physically ill and I don’t care. Imaginary spiders with sledgehammer feet are scaling the back of my skull and my eyeballs are being sexually assaulted in a crowded nightclub. I could vomit at any point.

But I saved the galaxy. I’m the hero. I managed to beat the most difficult and explosive missions, save (most of) the citizens and spit on the graves of my enemies. I got to have sex with a Quarian. Eventually I collapse into bed, often rising during the night - although it is already 4:00am - to vomit and writhe around on the bathroom floor. The next day I can’t get up at all, so I sit quietly in a dark room muttering about launching probes. It was totally worth it. Mass Effect 2 is interactive cocaine.
#Community    #OpinionEditorial
Login to vote this up!