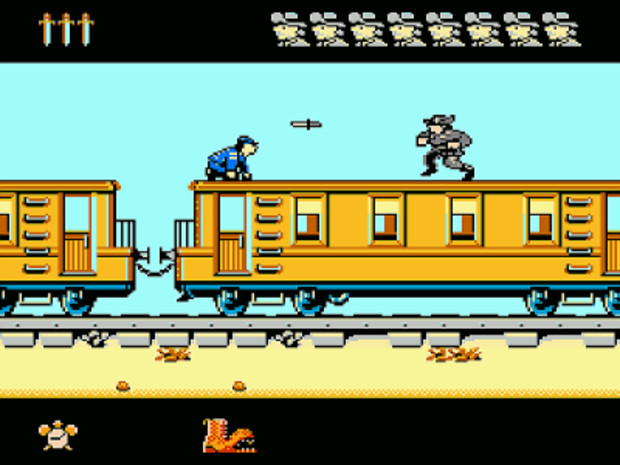 The key to winning these stages is knife management

What really set this game apart from other RTS games was the inclusion of side-scrolling VS stages. If you moved your troops to an enemy fort or train the game would move to a 2D view as your lone soldier attempted to conquer it over armed only with a few knives. The other player had a limited number of soldiers, each armed with a knife, to stop or slow down your progress. If you didn't have any more knives you could punch the opposing soldiers and send them flying into the air. And there was a time limit. These stages turned into some of the most intense gameplay experiences I ever had. One mistep could lead to failure, especially when you're running low on lives. I think this mode led to the most punches thrown in real life.

This video gives a good idea what the game was like, even though the person playing is terrible


Overall "North & South" was a unique title that boasted a variety of gameplay and a VS mode that was infinitely replayable. I find it odd that I never see it mentioned alongside NES classics but I'm sure that those of you who played it have fond memories. If you haven't experienced it it's worth checking out just to see how far ahead of its time it was. Now all we can do is wait for another cartoonish RTS/Sidescroller turning one of the most tragic events in American history into a children's videogame. I'm not going to hold my breath.
#Community    #Retro
Login to vote this up!

I grew up deprived of videogames, all I ever wanted was an NES and my parents said no way. So as soon as I moved out I bought a Nintendo 64 and haven't looked back since. I love most types of games, mainly shooters, action and Nintendo first party stuff.