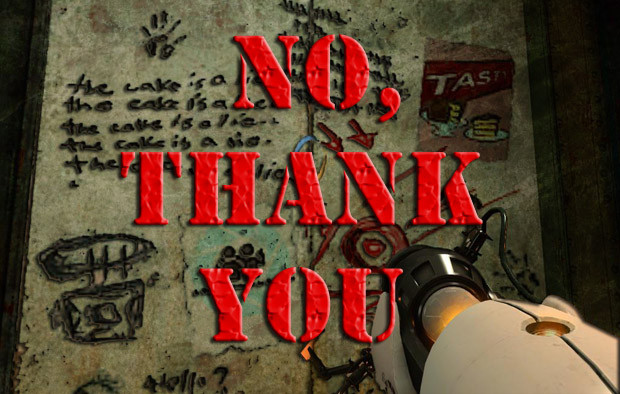 Let me begin this by saying that I am a small, hateful person that should be avoided or ignored, and that the opinion expressed in this blog is my own, and has no intention to troll, but rather used to vent some steam so I can go back to hiding under a rock and pretending like one of the most anticipated games in recent memory wasn't just released to critical acclaim and collective ejaculation of the internet. If that sounds bitter, then how much more bitter am I going to be when every last excited person starts putting up a blog, a tweet, or finds some other way to make Portal 2 insinuate itself into every conversation.

There are those of you that I assume are wondering what is wrong with me, and there is quite a bit, but I don't have the time or patience to get into all of that, instead I'm going to keep at what it is you are doing to add to it. More specifically my issue with people that can't contain their excitement, and how it ruins what little joy a dour person, like myself, could get from game by being overwhelmed by platitudes and misappropriated quotes. Just so we are clear in this, it isn't that I am not excited or happy that Portal 2 is here and great, but rather that I hate the chattering, squirrel-faced masses that will geek out on this game to the point where I can't respect the game for the sake of attracting the lowest of gaming lows, which is to say fan boys.

Take that with a grain of salt though, there are many things worth being praised, and the best of those things are always overrated to some extent. That I am worrying about how badly I am going to hate the fans of Portal 2 is only a testament its success. It could reach Star Wars, LotR, Harry Potter, and Twilight proportions. Again I feel conflicted in asking you to curb your enthusiasm because ultimately I love a lot of those things as much as you do and truly wish them the utmost public acknowledgement and critical approval, but all of the wide-eyed, wider-mouthed monkeys out there kill me. In that resentment, I am no better than the worst of hipsters. Frankly, I am disgusted by that, and wanting to hide away something great from the roaring, derpy crowd is no less evil than the crowd itself.

Yet here I am, yelling at the top of my lungs. So instead of me giving you more of that, I would like you to consider something. When you spend the next couple of months, or possibly years, gushing about Portal 2, don't concern yourself with whether or not the game is great, because at this point we all know that it is, but rather how much of a service you are doing the fan base of the game and those that you'd like to win over to it.

Responsibility isn't a concept normally considered when geeking out, as a matter of fact I think the moderation it implies might be the antithesis of geeking out. Although in my heart I still feel that bubbling, joyous glee, and I know that it is a good feeling and one that regardless of how obnoxiously it ends up being expressed that the source from which it came is worthy and right. I don't want to give up on awesome things because of whom they would align me with, and I don't think you do either. We can hope that one day we, myself especially, can unclench our collective sphincters and let loose with our feelings. I'm just worried that instead of hearing funny, little farts now and then that we might be spraying diarrhea all over the place.

So please think about it. Think about about it long and hard before becoming that inner geek. If you truly love the game, then the best thing you can do to show it is be able to make other people love you for loving it.
#Community    #Rants
Login to vote this up!