3:36 PM on 04.09.2011 (server time)    0
Adhesive Games recently released a first-person trailer for their 'mech FPS Hawken. I really shouldn't have to do anything more than embed this trailer to get you hyperventilating:

However, I know that's not Destructoid's style (nor would it appease my budding fanboyism) so I'm gonna post a laundry list of why Hawken looks so damn awesome:

It's a Mech Game
Ok, it has been ages since I really enjoyed a mech game. I've had little experience with Mechwarrior, grown tired of Mechassault, never got Steel Battalion, and learned about Chromehounds after the online portion had been taken down (regret, regret, regret). There seems to be a resurgence in the mech genre recently, with Trenched, Mechwarrior 5, and now Hawken slated for release. Mech games offer a different breed of gameplay than most shooters: instead of regenerating health or health packs, you have repairs; instead of one or two guns, you have a practical armory; there is no melee, no quickscoping and no similarities in scale. However I am by far most eager for Hawken for several reasons...

Art Style
Hawken's artistic direction is very unique and eye-catching. The haphazard, vertical buildings, with a faint green tinge (instead of the brown or gray you would probably expect from a post-apocalyptic shooter), broken up with vibrant billboards, graffiti and energy fields. It's like a more detailed Mirror's Edge, which is a really good thing.

Immersion
Hawken is a far more immersive experience than Trenched, at least (judging by the trailers). Keeping a first person perspective is a good choice that I think more FPS-makers should take. Furthermore, the 'mechs really have weight to them, and the weapons and combat are intensely dangerous-looking.

WTF? Stuff
Check out that trailer above, and you'll see that the game involves placing turrets and even air support in the form of a giant, badass spacecraft. It looks eerily similar to Dust 514 (also a very anticipated title), except Adhesive Games has released two trailers in as many months while CCP has been dead-silent. These simple, but sadly uncommon additions just make Hawken that much more awesome. 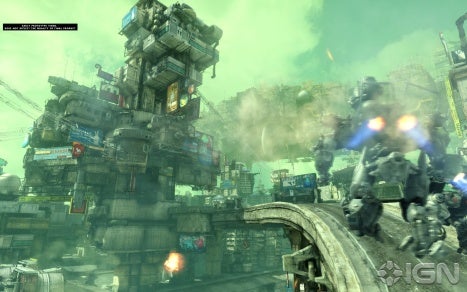 Now, what do I hope Hawken will become in the end?

Local Multiplayer
Adhesive, if you release this on the XBLA or PSN without local co-op, it will destroy my heart. That's all I have to say on the matter.

MORE Immersion!
Why are the mini-map and "You killed..." elements of the interface not also placed on some onboard computers? It doesn't even make sense.

Yeah... it shows that I am really looking forward to this as I have only two minor complaints about a WIP. More Hawken stuff:

The Escapist mirror with some commentary by Andy Chalk and Hawken sound designer Sean Neri.

Hit me with your comments, thoughts, and random banter!
#Community
Login to vote this up!