Aaamaazing: Guilt, I know you. 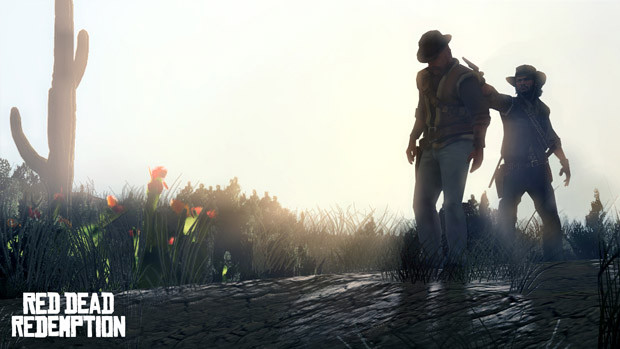 Hopefully this isn't as overwrought as I think it is.

Finality, the inevitable, time's march, all of these things are signified in the grains of sand as they precipitate from the top from the top of an hourglass. Whether they came from a beach or a desert, or were once more than that, something alive, it doesn't matter given time or in weighing it. These bits and pieces on an elemental level are merely markers, but shatter that glass and let them hold water, breath the air that was taken from them, and let them solidify into something that they once were before time wore it away, and took them grain by grain to mark its own passing.

Cracked open, that hourglass spills out onto the desert, plains, and mountains of the Dying West. The lives outside of the glass toppled it over while running towards Manifest Destiny and the great wideopen. They built roads over it, towns upon, and dug mines into it all with that same naive hope that you can only pity in a child and fear as an adult. They came looking for El Dorado, and what they found was an ocean, sand, and time to measure their regrets. Some handled regret differently than others, and while most accepted their lot, its those that could not and would not who were left struggling, wearing themselves down, grain by grain, trying to take back time while it took them apart.

Marston knew he was damned. He knew it was over, and he knew when he saw his own damned, pitiable fate in the lives of others. Yet he didn't want it for them, and sure as hell didn't want it for himself. The sand left behind him churned and drifted in the wind with the passing day's erosion. The flecks of it stung at his eyes, which held a kneaded squint that protected themselves from inundation. Upon his brow was the weight of this sight. There was no epiphany in it. The apocalypse came running, and in his youth he rode with it, now he could only regretfully observe the funeral and gussy up the corpses with an affected sorrow that no mortician would ever know.

From one funeral to the next, and cared for them like they were living, but they weren't. Here in this dead place, this cold place. Where one man came looking for dreams of riches and California, then the next he'd be buried at a waypost between one ramshackle fort or another in Idaho. Marston helped that man too, foot by foot, inch by inch, he eased him closer to that roadside grave. Not that either of them could fight the end result. One damned hand holding another can only walk the paths they know. It's shameful that they were deluded into thinking otherwise, but tragedies don't happen by themselves, and neither do miracles.

He unintentionally gunned down a negligent father in Blackwater, while trying to serve right by the man's bastard and mother by making a failed man mind his kin. You can't say Marston relished the look on the mother's face, or the on that he'd have to see on his own each day after. It was an act of self-defense, but it wasn't what any of them had wanted. He'd do again though, whether it were to make that painful choice to survive less noblely, or the choice to put himself in a place where he could have another chance dying doing what he thought was right. He'd kill himself and every low man and vagabond that he once ran with for one chance to have things right.

And you know him as well as the devil does, as God does, and his regret does.

What can I say? There's a certain amount of magic required to get anyone's attention and sympathy, whether it is through word, deed, or luck, it cannot be discounted that an audience that cares about a subject is inextricably going to pay more heed to you. Of course, when you gain this through pandering and artifice it can be seen as ignoble, and likewise if you gain it through luck and notoriety, luck's horrid, little accomplice, that the results can also be less than ideal. Writing it up puts me moreso in the former camp than the latter, and believe me I rarely feel noble, but sometimes you have to say the words somewhere contained, safe, and outside of earshot of everyone that really would like to hear it, if only for the sake of catharsis.

I'm sorry. That apology isn't for you, and because it isn't, so it is. You didn't need it, and I forced it upon you, so another is due, yet the sentiment remains the same even if the magnitude doesn't. Which brings us back to the insincerity of self-profession, and if it seems like I am beating around the bush here, it's because I am. This is me in the mirror, giving a pep talk to myself, striking those inopportune phrases that come oh so naturally from my mouth, and praying that the things that are rattling around in this cold, metallic heart resonate loud enough that you can hear them, understand them, and accept them before they finally wear a hole in it and break my maudlin, metaphorical cow-bell.

If only my eyes were closed, my mouth were silent, my ears covered, my hands bound, and my body not so painfully aware of the things that I were taught as virtue, the virtues that I learned on my own, and virtues so obvious that they just were. These virtues exist to balance out the ugliness that I have come to accept in their place, and that is a cold, dark feeling to have.

That blackened emotion, it's my identity. It's not good. You know it's not good as much as I do. I couldn't come to accept it Unless I were willfully perverse, which I think that I am not, it's still not an easy realization. Although if I were to come to it not consciously, then it would hardly seem much better because the truth doesn't hide itself, and as just perfectly as the duality between vice and virtue is there exists no way to room to distance yourself from it. It only makes you hard and clear when you're crossing that line in the sand. Guilt holds no visible grey areas, and the light that it gives off leaves deep, dwelling shadows inside of what it exposes.

Then time, and the forgiveness it brings, comes along and smilingly trivializes it. With a wink, a crocodile's tear, and some patience it makes gravity diffuse from the heavy soils of regret into dusty ash blown hither and thither. It's the hand turning the hourglass. Oh, how heavy that hourglass is, and how tightly the arms holding it wants to crush those transient pains into its chest and feel the form of something a bit more rigid, something time will respect, but time respects nothing. It may forgive, but it doesn't love, it doesn't cry, and it will not be there for you or me. So you must let go with a strong heart, unless time weather it away. Keep your pain on the surface, so the wind takes it. It is not a foundation that you should wish to build upon.
#Community    #OpinionEditorial
Login to vote this up!