12:35 AM on 04.03.2011 (server time)    0
So I just spent the last two-ish hours of my life frantically jumping around platforms, blowing away grinning (sometimes raging) skulls and desperately careening into crates.

Ladies and gents, welcome to the world of Super Crate Box. 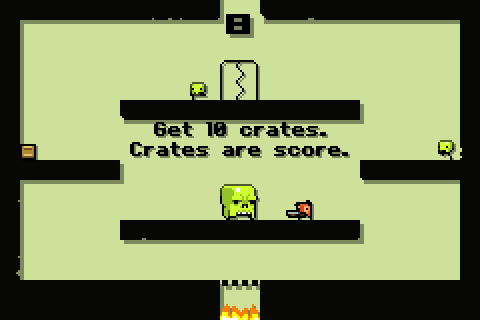 That pretty much sums it up.

Super Crate Box is a frantic platformer that has a simple, obvious goal: collect crates. Score enough crates in one round without dying, and you could unlock a new weapon (those are the best), character, or level.

Unfortunately for your character (randomly assigned each game), you are not alone in this land. Grinning green skulls fall down from a slit in the sky in three variates: the small, cute ones; the terrifying monster ones; and the really frustrating flying ones. The first two merely trudge around, bumping off walls and over ledges, but the flying skulls follow your every move - and one hit from any of them is lethal.

Furthermore, at the bottom of each level lies one or more fire pits that "irritate" any enemies that pass through it (only the walking kind do this). They re-emerge at the top of the level, reincarnated as horrifyingly ferocious fiends who will kill anyone who gets in their way.

Seriously, words cannot describe how scary an enraged monster-skull can be.

But fear not - these crates you will sacrifice your life for contain precious ordnance. The ridiculously effective revolver, the hilarious disc gun, and more explosives and automatic weapons than you can hold at one time. Perhaps my favorite is the laser rifle, which forms a sort of laser-bayonet that instakills everything close to you before firing and instakilling everything else.

I really have no idea why the fire has been replaced with a green button...

Perhaps SCB's greatest strength is the art direction. The environments and characters are well-drawn and imaginative, but the enemies are what really shine. The implike skulls are disarmingly cute as they amble around on long, gangly legs. It's hard to describe, but you almost want to die if you could give them a hug. Until they go through the fire, at which point they are screaming balls of terror.
The monsterskulls on the other hand... well, I already described them. Hulking beasts that clearly do not want a hug. That's OK, I'm not asking. The music is also very enjoyable, each level given it's own variety of retro tunes.

As for the mechanics, I cannot complain - the action is fast and addicting. Vlambeer has done a great job with the setup, allowing you to mash enter as soon as you die to jump into a new game, and there is a lot of variety in how the guns work.

My only complaint is that there seems to be not-a-lot of content in the game. I know that seems contradictory to what I was just saying, but let me explain: once you reach a certain number of crates in one game you unlock a new game, and getting a cache of crates overall nets you a new gun. With only two unlockable levels and maybe a half-dozen guns (again, unlockable), all of which I have already gotten, I am really missing that countdown timer that appears after every game. "70 crates to get a new gun... 69... 68..." The soundtrack is also rather short and gets old after prolonged playing.
Sure, there are also game modes to unlock, but those require extraordinary amounts of crates to unlock. I suck too much too much to get them. I guess I'm complaining because I suck. Is that a problem?!

However, none of that should keep you from downloading the game, considering it's free. What are you still doing here? Go download it!

[As a final note, the game also saves your file right next to the executable, meaning it's great to keep on a thumbstick for mobile game. Another one for my collection.]

Cons
- Lack of content?
#Community    #reviews
Login to vote this up!