11:49 PM on 03.19.2011 (server time)    0
I never actually planned on buying Bulletstorm. It seemed like another cannon-fodder FPS: run, stop and shoot some baddies, run some more, rinse and repeat. Why did I initially buy it? Amazon loves dangling that little “$20 promotional credit with the pre-order of this title” in my face. I have yet to turn them down on that offer. So, I bit the bullet and decided to go for it.

To my satisfaction, this game delivers in the “creativity” caption at first. In the first couple hours of the game, it gets really interesting as more and more weapons open up every so often. There are only about seven guns in the game (one becomes available very late in the game), and they are sporadically unlocked throughout the campaign. It was fun to use the secondary shots on the guns, doing things from igniting enemies into nothing but bone to firing an explosive flare at an enemy, sending them spiraling into the air. The leash works quite well, and the game gives you lots of opportunities to use your environment. The most common of those opportunities seems to be kicking enemies into cacti or spikes and kicking them off a ledge. Mid-game I began to worry that the game was getting repetitive.

It did the opposite of that, however. After the first boss battle (of two), I got a renewed sense of “I am amazing”, as the game does a great job of making the player feel great for bringing down a massive boss. I began to hunt through the skillshots list to try and sniff out unearned points. Bulletstorm does not react well to that, though. In fact, when I tried to find the skillshots, I could not manage to nail them. The system includes tasks like “shoot an enemy in the throat” to “launch a guy in the air, kill a second guy on the ground, and then kill the first guy before he lands”. These tasks provide your points to buy weapon upgrades and ammo. I got concerned that maybe I would have to use points rationing very carefully to balance out ammo versus upgrades, but through the repetitive easier skillshots, there was no need. There is not a lack of ammo in the game, so buying upgrades is not a place to be conservative. 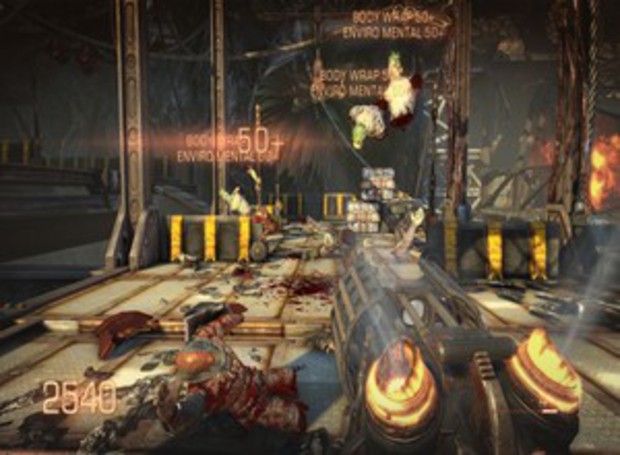 The one time I managed to get the aim right on this thing was the most rewarding.

The multiplayer is interesting but somewhat saddening. It is not saddening because it is bad. In fact, the objectives during multiplayer are excellent and novel. They have you and several other players (four player max) in a “horde mode” style arena fighting wave after wave of enemies, scoring skillshots. It takes a certain number of total group skill points to move on, and sometimes the only way to achieve this is through group based objectives (such as player one kicking an enemy into the air and player two shooting them in the groin). The disappointment comes with realizing that 75% of players (especially on the PS3) will not use a headset and, sometimes even if they do, will not care so much about group-based objectives and will just go off on their own to try and rack up kills and points, leaving the group total shy of the required amount to advance. This is a large problem, but it is not impossible to find a good group to play with.

The final impression is that Bulletstorm is bittersweet. It is intriguing, putting an interesting and fun take on the genre. It was tons of fun to play and go through the campaign, though the constant over-the-top dialogue that was supposed to make the game great end up hurting it. There are plenty of cool weapons, power-ups, and skillshots that will satisfy and challenge any shooter fanatic. The multiplayer is good when you get a group willing to work together, and graphically the game looks pretty good. It is a definite buy for anyone looking for a change from Call of Duty or Halo and if you are on the fence, you will not regret picking up Bulletstorm.
#Community    #reviews
Login to vote this up!