Introductoid: The Legend of Me!

1:51 AM on 02.20.2011 (server time)    0
Hello, fellow Dtoiders. In the context of a creative writing class I thought I could finally get some introductory blog up in this bitch.

Well then, let's pop this fucker in. Power on.
Day X.XX.1985. The world lies in ruin. Just a small ray of hope penetrates the dark clouds.
Title screen. New Game. Parents, please enter the name of the protagonist. "D.A.W *whoops* ← *delete* V.I.D". DAVID, please confirm. So it begins. Spawning point Cologne, Germany.
Do you want to play the tutorial level? Yes, I wanna do that. Okay, let's go. You start with one twelfth of a heart, try not to die, you only have one life. Oookay...

After absolving the first part of the tutorial our hero – he has now two hearts – has learned to walk, has begun to talk and stopped shitting himself.
-TROPHY UNLOCKED: About damn time!-


So, the hero ventured forth through the rest of the tutorial like it's kindergarten. Once he accumulated six hearts he entered the first dungeon the elementary temple. There he faced many perils, yet he was not helpless. Right before his departure his father had taken him aside and told him "Oh, boy, oh, boy. It is dangerous to go alone. Take this." and handed him a GameBoy with Tetris and Super Mario Land.
-TROPHY UNLOCKED: Hooked!- 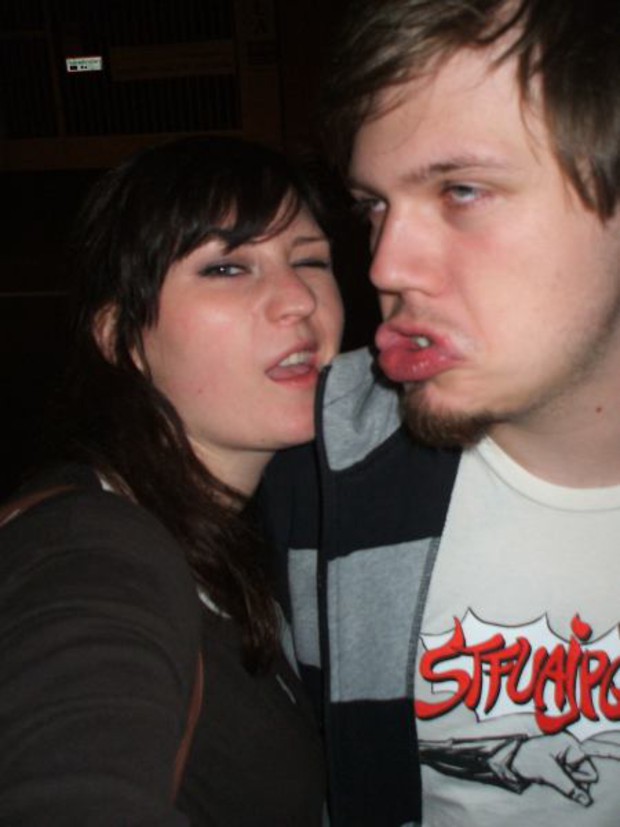 My sis and me, some time ago

Several levels later, present day. The health meter shows 25 hearts, several stats are maxed, Omnislash and Heartbreaker are learned. Our hero achieved Master form. Through meditation, asceticism and a moonstone the PlayStation2 evolved into a PlayStation3. This is the current training ground of the hero where he uses all of his experience to go even further, over the edge, to uncharted regions, through a crack in time, across the vast, dead space ocean to little big planets.
-TROPHY UNLOCKED: Kaiser form!-


Hi, guys, story’s over. Hope you didn’t get bored.
The main reason why I want to get into blogging in general is to preserve and develop my English language skills. Destructoid in particular, of course, because of my interest in gaming and gaming culture. When I started reading Destructoid on the 26th November of 2007 (yep, I know the exact date, beat that) I was quite impressed by the cultural and sometimes even philosophical approach to videogames. Two series I really loved were “The Fear” and “The Memory Card”, because I could relate to some of these experiences.
In the last year I began to pay more attention to the community aspect of Destructoid and read the C-Blogs frequently. I liked what I saw and now I’m here. Let’s see where this leads.

Well, what’s left to say? Maybe a list of some favs and current games.

Currently playing:
Deadspace 2, Minecraft, Little Big Planet 2, Demons Souls, Empire strikes back (yeah, the one I mentioned above. I never finished this piece in thirteen years or so! This game is so hard and unforgiving that, well, it’s hard as fuck!! BUT I got my GameBoy out again for long train rides and I still want to finish that little bitch.)


-TROPHY UNLOCKED: Also, cocks!-
#Community
Login to vote this up!