What this is, is a bunch of observations I made while playing Metro. You see, I love Metro 2033, but what I found is that it's unrequited: it hates me. Or, to put it differently, there is no wholly good thing in the world of Metro. They say there's a silver lining to every cloud, but in this world, the cloud is actually smog, and the lining is probably asbestos instead.

Before I get into all that, you have to allow me my requisite minute of gushing. I can't shut up about this game, least of all on my own blog. In today's gaming landscape, where open-world sandbox games, side quests, leveling up, loot gathering, and player-directed narrative are all the rage, I was at first surprised then greatly pleased to discover that the essence of Metro is an unapologetically linear story with nearly no branching whatsoever. Occams actually suggested that it's similar to Half Life 2, and the more I think about it, the more apt that comparison feels (so thanks for that).

Silent protagonist? Check. Nary a cutscene? Yep. What little cutscenes there are, are shown in first person? Uh-huh. Some light platforming/exploration where they give you very little guidance as to the correct path? Got it. Some really tall, thin creatures? Now this is getting eerie...

It seemed to me while I played it that the developers had some strong guiding design principles that they kept in mind throughout, one of which being that nothing you find is completely beneficial, or, alternatively, that there is a downside to everything.

Starting with weaponry, it becomes rapidly apparently that a lot of the guns outright suck. They take a fair number of bullets to kill most enemies and take a while to reload. If you've read much about this game, you've heard about the oft-touted choice between using the military-grade ammo or the grade-school ammo, the former being both more damaging and money. So it's not really much of a choice at all, in my mind. (I always save my money)

Most guns use iron sights, which aren't too easy to aim with in general. You could buy a gun with a scope, but even having a scope isn't all it's cracked up to me. Go ahead and put your little eyeball up to this one. 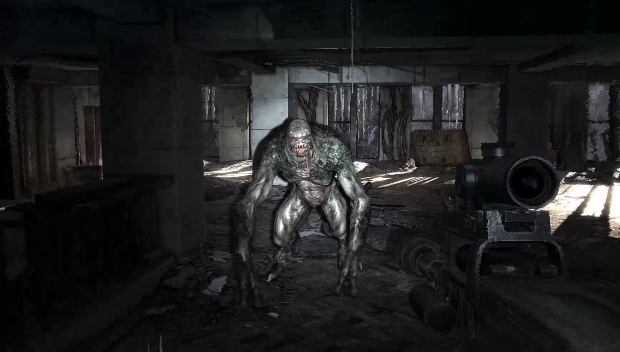 There's a section in the game where you have to carry someone on your back. This might sound unremarkable, but it's cool because of how absurdly unwieldy the kid is. Your aiming and movement get all floaty and wacked out, as if you can't control your momentum all that well--which is a pretty good approximation of what that would be like. It was one of the only escort missions from any game I could get behind.

The game is focused, quite playable, and highly competent in what it sets out to do. It's probably because it's not an ambitious game that it succeeds so well. I know people had some complaints about balance. I'll admit I played it on easy, because I wanted to experience the world, amazing story, and atmosphere without bothering with those complaints. Maybe that will help eliminate the whiner in you, too!

I'll also throw out a bit of a thanks to Gabba5000 for his Metro walkthrough, which I used to get the nice quality screenshots. Better than shaky cam pictures of my TV!
#Community    #Rants
Login to vote this up!