Dag yo! So, it’s been quite a while since I’ve done one of these. It’s been about TWO months since I’ve done my last A Compulsive Collector’s Haul and even then, that was a haul from two months prior , for a total of FOUR months ago. So, in reality, I’ve got a backlog of FIVE MONTHS to catch you guys up on . . . >_< With that said, we’re NOT doing that today, since I’ve gotten a number of requests to do my more recent haul from my trip to JAPAN! I’ll catch up on those with slightly more halfassed versions of my series, but are literally full of SUPER AWESOME stuff. I’ve got about 150 pictures from the past 5 months that I’ll catch you guys up on after this blog, but for New Years I was in Japan, the land of collectables like none other and general gaming mecca! Keep in mind (for those of you who actually read what I write, as opposed to those of you who just look at the pictures! =P) that not all of these items are for myself. I got a few of these items for friends and homies, like possumwrangler and Zoel. I also have excluded some items from being photographed, so that they remain a surprise when their respective recipients receive them, they’ll still be a surprise!

Hmmm, what else? I haven’t been posting lately due to me finishing my university degree and working 2 jobs, then going on my trip. It seems the site is still lacking good community driven blogs and the quality has been lacking. Yojimbo hit the nail on the head in his latest blog about how nothing has really changed, in how you still have people writing poor quality blogs about the same shit that’s been repeated a million times over. I’m on Wry Guy next Nostaljourney about Jet Grind Radio. Hmmm, Beyamor, knutaf, Stevil, and manasteel88 (and a few others, you should know who you are! =P) can still be counted on to make for good reading. Hmmm, some of you may not know him, but anyone else REALLY miss The Obscurer Tribune by the ever lovable BulletMagnet? Also, why are people still commenting on the blogs of hopeless tards who pretend to contribute to the community, but in reality are just stubborn, simple minded trolls? Enough with the thoughts, those will continue in the next few blogs, but I’ll going to bring back an old “tradition” of mine as well . . . some of you will notice it right off the bat.

I’ve been wondering lately what exactly is a “gamer?” I mean, you can subcategorize them into “hardcore,” “casual,” “kid,” “adult,” “bro,” etc. Why can’t we be happy with a simple term? Not everything has to be “in-depth” or “evolved” or that bullshit to “grow.” Overcomplicating shit for the sake of overcomplicating it is just fucking dumb. It’s like me not saying I’m a “human being” or “person,” but in reality I’m “yellow,” or possibly “Chinese,” then again, I may be “Asian,” or who the fuck cares about these technicalities since you’ll always have people who make them out to be a much bigger deal than they are, just so they can feel . . . “important!” Just for the record, I don’t see “gamers” . . . I see “people!” ^_^ ON WITH SHOW! 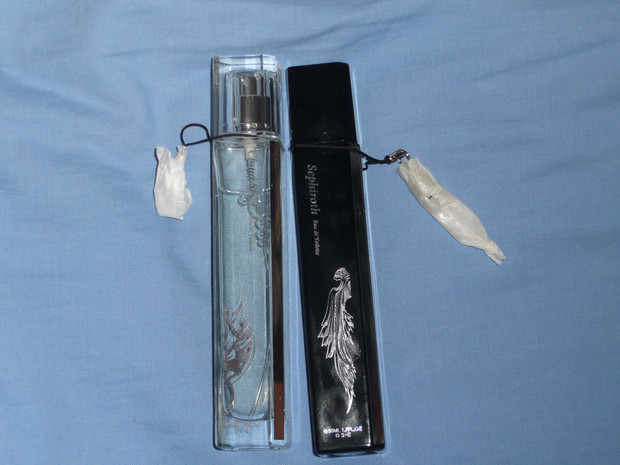 So, I ended up with these because there was a fairly attractive Japanese lady who was monitoring the “upper” part of the Square Enix store, was giving out those little sample cards of these colognes, and told me they had a sale on them if you bought both. I’m a tard and ended up with both. >_< So, we have here Final Fantasy VII: Advent Children Cloud Strife and Sephiroth Eau de Toilette. You can’t tell by the picture, but the Sephiroth box has a clear case around it. Truth be told, while being fairly collectable, they actually smell pretty good. I do prefer the Sephiroth one over the Cloud one, but we’ll see if I decide to use them and just keep the bottles, which is a somewhat high probability right now.

Well that’s it folks. That took a hell of a lot longer to write than expected. I hope all of you had a Merry Christmas and Happy New Years! So, I’ll be catching up on my 5 months of backlog starting next weekend (hopefully), so be sure to stay tuned to that. I do have a serious question though, since I know some people hate being forced to view them, or having others just assume they’d be interested in something. But I have a TON of pictures from like the Square Enix store, Luida’s Bar, various gaming places, tourist sites around Tokyo and Kyoto, lots of food ones, Shibuya (where The World Ends With You takes place), and a bunch of cool/interesting stuff. Would you guys be interested in me making a blog with a bunch of pictures from those places? If so, any in particular that you would be interested in and those you wouldn’t from my list? I will base whether or not I do a blog of pictures from my trip, on comments on this blogs, so if you do have an interest, please comment and I’ll see what I can throw together. Until next time though, latez mates.