Which pop star recently made a surprise return to the group Take That?

That was the weekly question I received by text, for the episode of the gadget show I wasn't even watching.

As usual, I laughed at the sillyness of the question and responded with nothing more than a text saying "A".

3 weeks later, the phone rings and it's a number I don't recognize. "It's probably my mobile company calling about me paying my bill late" I thought...

"Hi, can I just confirm your mobile number please? OK, that's great, I'm calling to let yo know that you've won the gadget show competition! Congratulations! I need your details, height for the bikes, shoe size for the rollerblades and trainers, and clothing size for the Golf clothing."

Shock. Days of shock. Not sure if it's real or a scam. Then the list arrives by email....

(Bear with me, it's seriously long..)

Phew, man that list is epic, but not half as epic on paper as it was in real life! Two weeks later, this arrived... 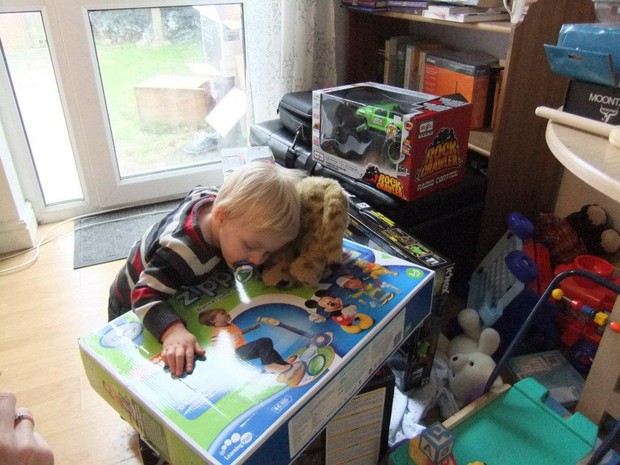 So for all of Monday my house was packed like some kind of gadget warehouse! Until I got through box after box, marking stuff "keep" or "sell" and unpacking and setting up all the keep stuff.

I was really interested by the "High End Gaming PC" from the list, was it going to be a big Alienware tower? Was I going to be able to plug it into my TV? Or would I be needing a desk?

Then I spotted the box, this is probably my favourite thing on the whole list...
(unfortunately Dtoid seems to be having trouble uploading that image, but it's a Sony Vaio Touchscreen PC, like a 24" screen, with the whole PC built into it, one cable, no tower, wireless kb/m it's gorgeous. Which now lives next to my 50" plasma TV.

I don't seem to be able to upload images taken on my new camera.. weird. But the only images worth mentioning on there are of my new TV, with PS3, cable TV, surround sound and Xbox 360 plugged into it. PS3, surround sound and Cable box taking up shelves on my media unit, and the 360 taking pride of place, on the floor down the side of my unit. lol.

Bit of a bummer that I'm having trouble with the other pics, maybe too big from my new camera, who knows.

So yeah, I'm one happy happy bunny right now, blogging in my den, from my Macbook, listening to Sleigh Bells really loud on my amplamp.

But I've got to go, as someone is coming round shortly to buy my Easy Glider - I'll never use it.

I'll try to find something cool to do a Dtoid competition with too.
#Community
Login to vote this up!

Father to a beautiful little boy, Vinnie. And husband to a gorgeous woman called Rowan, or "Mrs SC" to you guys. ;)

Prima Tiger for the SVER PMC - Fighting for a SVER victory in the Shadow War.
^That is a lie, I now fight for Raven, for FNF reasons^

Sony supporter in this sport we call a "console war."