Why Move and Kinect are Doing it Wrong pt 1 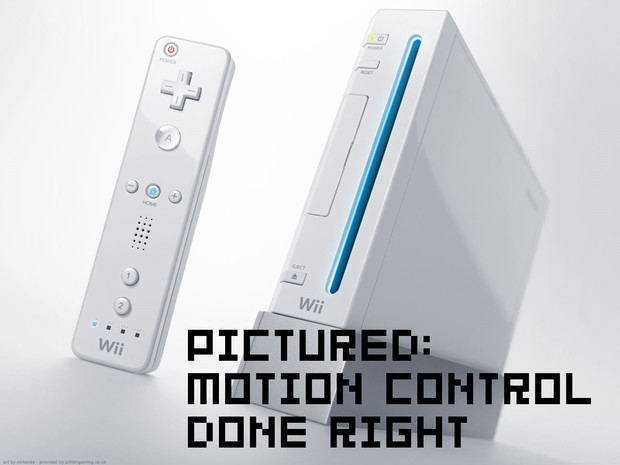 Note: Even though I'm not personally a fan of the Wii, this series explains why Microsoft and Sony could learn a little from Nintendo.

On November 19th, 2006, Nintendo launched their next foray into the console market. It did away with complicated controllers, and instead opted for a motion-tracking controller that looked like a TV remote - an attempt at subconsciously attracting people who would rather watch TV than play video
games. It would "change the definition of video games".

Along with its pack-in game, a simple sports game, Nintendo hoped it would encourage people of all demographics, to try playing a video game that didn't need complicated, button-restricted controls. Or, in Nintendo's eyes, buy the console.

I am, of course, talking about the Wii.

When the Wii launched, it quickly gained much attention. Not as a video game console, per se, but as a fad. Soccer moms all over just had to get one of those Wii things. Mom might have let Grandma and Grandpa play Wii with their kids. As a result of people like them, the Wii has outsold both of its considerably more powerful competitors, due to its sheer mass market appeal.

And that, ladies and gentlemen, is what they are doing wrong.

Both Microsoft and Sony think that by emulating the Wii's idea of motion control, they think that they will have similar success to Nintendo, and bring in "casual" gamers who don't want to play complicated games with a confusing controller. But they have a few key problems in their way that one or both of them fail to realize - chief of them being:

The Wii simpler, cheaper, and easier to use than Kinect or Move.

One of the biggest problems reaching out to non-gamers and casual gamers, is that many of them don't understand the process of buying a video game console and investing in it.

The inexpensive Wii comes bundled with everything the consumer will need to play games on it,other than a second controller set. It is because of this simplicity that helps lead the Wii to success.

On the other hand, here are the options for the PS3: Customers have two options - (depending on the game,) buy up to three different accessories for their PS3 for Move to work, with a high price tag - or buy a bundle pack, also with a high price tag. The effect of buying a simple, cheap, self-contained product is then lost on the consumer.

Even Kinect, which will presumably come in bundle packs and standalone, will most likely lead to lower sales simply because of this simple problem.


A customer can simply go to the store and "buy a Wii". An average, uneducated consumer can't just go and "buy Kinect" or "buy Move".


I could go on, but I'll probably save the rest for a part 2 so I can collect my thoughts.

To be continued!
#Community    #Rants
Login to vote this up!