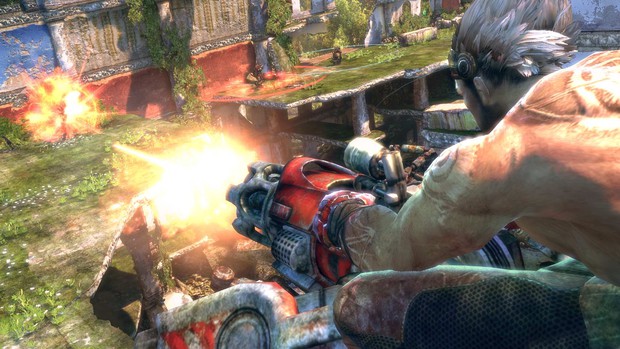 Environmentally and graphically, the game is astounding. The rusted hues of the prison-ship make way for the bright blue sky, then lush green and red foliage around abandoned, decaying buildings. The animation on the characters is particularly impressive; Monkey’s trips and stumbles as he sprints through the ship are very fluid and natural. Aside from glowing pipes and handholds, there are some parts which do require a little bit of thought about which direction you need to go and what cover you’ll feel you’ll need when avoiding mech-fire. Trip doesn’t get herself into trouble too much as long as you have your wits about you, and as a result, becomes more of a help than a hindrance with the few abilities that she possesses.

As for negatives, the character did get a little caught on the environment because of a dodgy camera angle, which may not be handy when running from a cyborg dog about three or four times your own size. There is also this feeling of not able to jump to a surface which I felt would be achievable with the agile Monkey. Nevertheless, with the game near to its release date, I am more than satisfied that Enslaved deserves your attention and a small chunk of your bank balance when it arrives on shelves.
#Community
Login to vote this up!