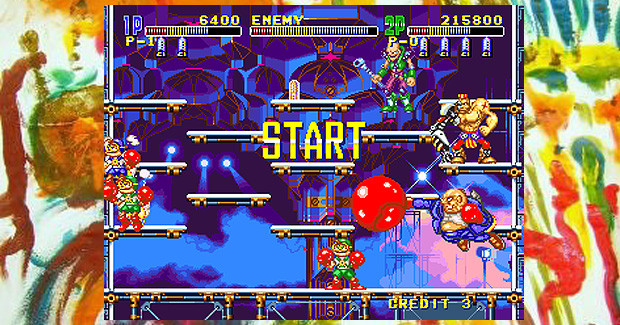 Anything Else? – The best alternative I know of to Funky Jet’s genre-defying freedom of movement is unsurprisingly a homebrew creation, Inyou Douji Monogatari, which allows players to fly around at will in somewhat similar fashion, though its levels tend to be more confining. One “official” release which taps into this same spirit is actually an earlier and much more “traditional” title called Rod-Land. You get around mainly by climbing ladders, as your character isn’t even able to jump - the cool part is that you can create a ladder out of thin air, ascending or descending, pretty much any time you want, though only one “insta-ladder” can exist at a time. You can use this ability not only to traverse the landscape but to mislead and trap enemies, whom you actually want to leave alive (if possible) until you can activate a temporary “Extra” mode, during which they’ll start coughing up extra lives. If you’d like to experience another unique Mitchell puzzler which has passed WAY below most gamers’ radar, Ko no e Tako is as fitting a candidate as you’re likely to find: its official page is here.

…and with that, I finally lay down my chalk, for good this time.

At this point you have experienced pretty much every worthwhile thing I know about obscure puzzle games: I declare your “formal” lessons for this curriculum to be over. That said, you and I are not quite finished with each other yet – after all, what’s an education without a little pomp and circumstance to top it off? Next week I will be delivering your graduation speech: I do hope you’ll stop by, as I intend to leave you with a few final things to think about before taking my leave. That’s all – for the final time, class is dismissed.
#Community
Login to vote this up!