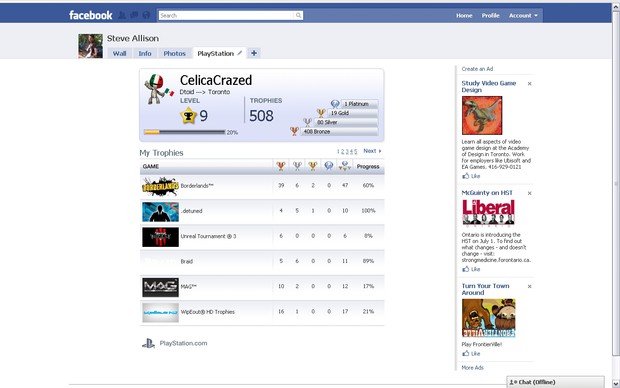 Yes, I’m talking about more Facebook. Deal with it.

Along with the firmware update and Photo Gallery update, Sony also finally released an app on Facebook to post your PSN ID. It’s pretty bare bones though. It contains your PSN name, your trophy count and level, and the list of games you have earned trophies in.

For some reason, you cannot actually see trophies for specific games. You just get the overview. I thought it was supposed to show the PSN ID of my Facebook friends, though it could be because none of my friends have it to begin with. Oh well.

Not really much more to say. Is it worth a download?? No probably not. It has little functionality other than stating your name. If you like me have been wanting a way to put your PSN ID on your Facebook page though, then you probably already have this. If not, it’s your call.

Also, this is the first Facebook application I’ve ever downloaded. I held out for so long but couldn’t resist.

Also, also, I was planning on including my Medal of Honor beta impressions here but it was making this blog way too long. Since you are never supposed to serve the main course first, nor dessert, I’ll post it in a day or two. Hope you still have an appetite then.

And I made it through an entire blog without mentioning PlayStation Home once.....oh DAMMIT!!
#Community    #PS3
Login to vote this up!