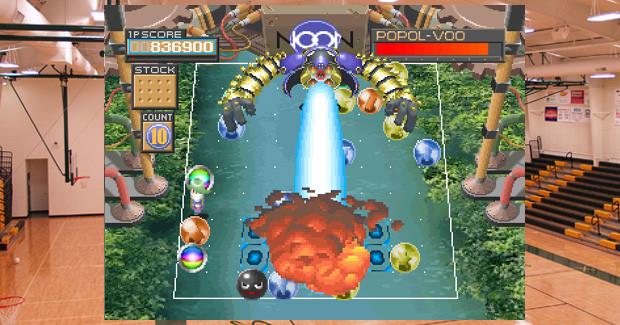 Anything Else? – The best-known cousins to NOON are the various Bomberman games, along with more obscure “overhead versus action-puzzler” variations like Exvania. Moss's Flip Maze is also similar in spirit, though here you don’t attack your opponent directly – instead, by arranging the tiles on your side into sets (and sets into combos) you create garbage which can push your opponent off the edge of his playfield (doujin offering Otoshimasu offers a “remix” of these elements). Octomania (aka Noo Kone Puzzle Takoron), despite utilizing a cursor instead of a character, also has some kinship with NOON, insofar as you’re tasked with sorting out a constantly-filling screen, hoping to swamp your rival before succumbing yourself.

….aaaand TIME! *blows whistle* Good work out there today – make sure all balls, blocks, and other various multi-colored implements are back on the rack before you head to the showers. By the way, I don’t want to hear any more reports of towel-snapping “mini-games”, got that? Okay, get yourselves ready for the next class, everyone – I’ll see you all there, same time next week.
#Community
Login to vote this up!