10:11 AM on 06.27.2010 (server time)    0
[Disclaimer: This blog does not represent the views or opinions of Enkido as he exists in a sane state and he cannot be held responsible for the content expressed in this article. For real, just feels like writing today. Also, cocks.]

I guess I'll start with something that has been bothering me for a couple days now. I have a bit of an axe to grind with Apple. The new iPhone 4 was released this past Thursday to great anticipation. As expected it sold gangbusters. However, it did not take long for users to start reporting problems, some of which are pretty serious in my view. The first complaint was yellow spots on the screens. From what I hear, this isn't an issue anymore. Something about the glue used on the glass not being dry yet. Still that seems like something you would want to make sure of before you ship it.

The bigger problem seems to be the antenna on the phone causing signal problems. In the iPhone 4 it seems that the antenna is incorporated into the case design. Steve Jobs called it "brilliant design" during the annual Apple conference, and some have called it a "work of genius." Now I have been considering getting a smartphone for a little while now. When it comes to things like this I like to do a little research. I have never been a fan of Apple (I have never owned an iAnything and I'm really not a fan of closed systems, no matter the benefits), but it is impossible to ignore the success the iPhone has had in the market. As it seems to be the phone to beat, it made sense that I look into it when deciding on one.

I was not about to go out and get a 3GS though. No, I decided to wait until Jobs unveiled the newest edition, and see what the launch brought. In the case of the iPhone 4 it seems it brought problems. From what I hear this is somewhat typical, and the problems are usually ironed out in short order, so I wasn't really ready to discredit them yet. Then I heard Apple's response to the problems.

It seems that if you hold the phone a certain way, you bridge the gap between two antennas and lose signal. In my mind, that is a serious design flaw and also a deal breaking issue. Of all the things I could possibly want a phone to do, it would be to make calls when I need it to. I don't care if it cures cancer or brings peace to the middle east, I want my phone to be able to make calls first and foremost. You can ask my last phone, which due to failing me when I needed to call for a tow truck, now lays crushed into dust somewhere on I-95.

Now when reports started coming in of issues with the phone dropping calls and losing signal, Apple was quick to respond. Wait, let me get this strait, your response is basically to tell the consumer to not hold it that way. WHAT! ARE YOU FUCKING KIDDING ME! Seriously, I don't care how good the design looks, if it can not do the one thing it was primarily meant to do then it is bad design. And your other suggestion, "buy a case," NO, I shouldn't have to. Good design means that it does what it is supposed to no matter what conditions it is put under. I want to be able to do anything short of firing it out of a cannon and still make calls, not to be crippled because I like to hold it a certain way, and I most certainly should not be required to buy another product so that your previous one works. It doesn't work like that. 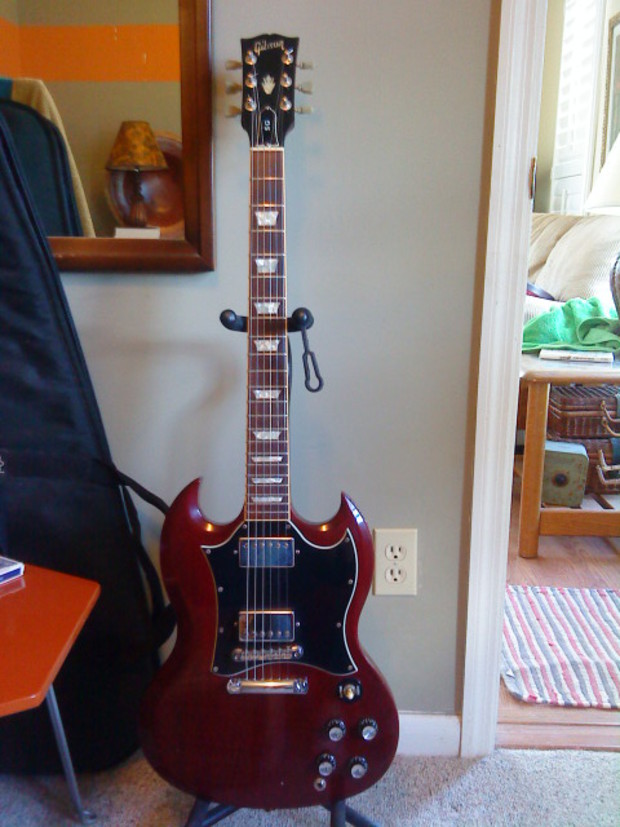 Look at that, my God is it a good looking piece of musical equipment. It is a '97 Gibson SG. I've been slacking recently when it comes to practicing guitar because of all the other stuff going on in life and I was looking for a reason to get back into it. I am proud to announce that I found it. One of my co-workers brought it in Friday and was selling it for $400. That was a great price for this guitar, and it is in absolutely great shape. I have been playing the hell out of it since I got off work Friday at just about every opportunity I get.

I also, saw Toy Story 3 with a friend of mine. My opinion, go see it. I love Pixar's stories because of the way that they can appeal to everyone. While Toy Story 3 is in my view a more child focused affair, there are plenty of mature themes and references that older viewers will be able to enjoy. Pixar has definitely managed to keep their imaginations in tact for this. It really doesn't disappoint and there were a couple times where the movie really talks to the viewer. It even has a Stevil reference.

Speaking of said friend, after the movie, she and I ended up having a few drinks together. Nothing substantial, just had to finish up the last quarter of a bottle of rum before my parents get back from their cruise, barely enough to get tipsy. Long story short we ended up in my bed and we talked until near daybreak. It was really enjoyable actually. We ended up falling asleep together until sunrise. Now I'm a bit confused, and I don't know exactly where that puts us. Making things more complicated is the fact that she is fleeing the country in less than two months, which means either one of two things. She found out about the others, or she is serious about that foreign exchange thing she was talking about. Regardless, seems like I'm just going to have to go with it and see where it leads, if anywhere.

The A/C at my house is broken. This sucks. It is the middle of a humid Florida summer here and the thermostat is reporting a temperature of 84 degrees inside my house. Fortunately for me, I have a window mounted A/C in my room. Not so lucky for my siblings.

Lately, I have had a couple of new bands pounding around the inside of my skull. Some of them are Arcade Fire (and one more), Beirut (and another, ok, I'm done), and Fleet Foxes, whose name I love.

I really enjoyed the Jimquisition. It seems like something I could really get into. I like the Sundays with Sagat feature and hope that continues, but this seems like something more serious that would make a good substitute for Rev Rants. Also, sunglasses.
#Community    #NOTvideogamesrelated
Login to vote this up!