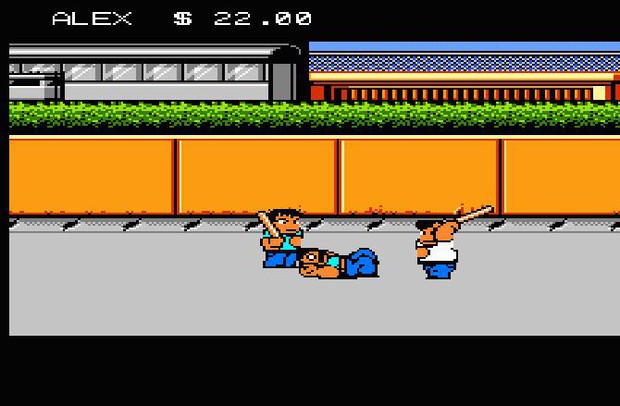 Yeah, beat em ups should all have RPG elements. Especially when presented like this. You've stats that all are exactly as they sound. Throw, weapon, punch, kick, and the rest are all pretty clear. The way you increase them is brilliant. You use the money from the gangs to purchase food upgrades. And you can buy books to learn karate, such as stone fist or dragon kick. Imagine kicking or punching three times in a row. You also can buy more advance flips and throws that are tricky to pull off, but put a hurting on your enemies. Whats really great is how humorous all these resteraunts are. For example, some places let you get a free smile.

Besides that is that you also can use weapons. Each of the gangs uses weapons on you, but you can steal them. So you can whack them with barrels, chains, bats, and even each other. You can pick one guy up and slap him at some other dork. You can throw weapons, you can throw the second player, you can do it all. Speaking of the second player I think that's where this really shines. Usually I play one player, but when someone is over this lights up completely. When someone comes over to play video games and has no clue what they want to play, I know exactly what to whip out. Myself and a friend about four or three years ago ended up playing this for two days straight. He actually came back over and said "hey lets play that game some more." So of course we did.

This game is so charming. As are all the games with this look. Technos had released many games with this "kunio" blocky big eyed guy characters, Super Dodgeball being the other most well known nes game. They also did a few other River City games.Renegade, an earliar release on nes and for coin op, was part one to Ransom. Its clear that there are similarities, but its not near as classic as this. Renegade I don't much care for. As for sequels, I've yet to play one I really enjoy. I'm told the snes japanese only one is great, but it isn't english. And isn't named right, so I forgot its name. A few months passed with me hunting for the name, Shodai Nekketsu Kouha Kunio-kun. Forgive me for forgetting THAT. It came highly reccomended, but I couldn't get it to work. A remake on gameboy advance is out, River City Ransom EX. While not horrible, I didn't enjoy it as much. My main problem with it is the graphcs. It just went too far into the anime look instead of the big head block look. Ultimately though, it was a great game. So I can't fault it that much. Other than that, the other kunio games will get written up soon.

Old arpartment, with Abbey where she sat throughout the game.

River City Ransom is technically one of the best games ever. Mechanicly, presentation wise, and sheer fun factor. Have you ever played it?
#Community    #Retro
Login to vote this up!