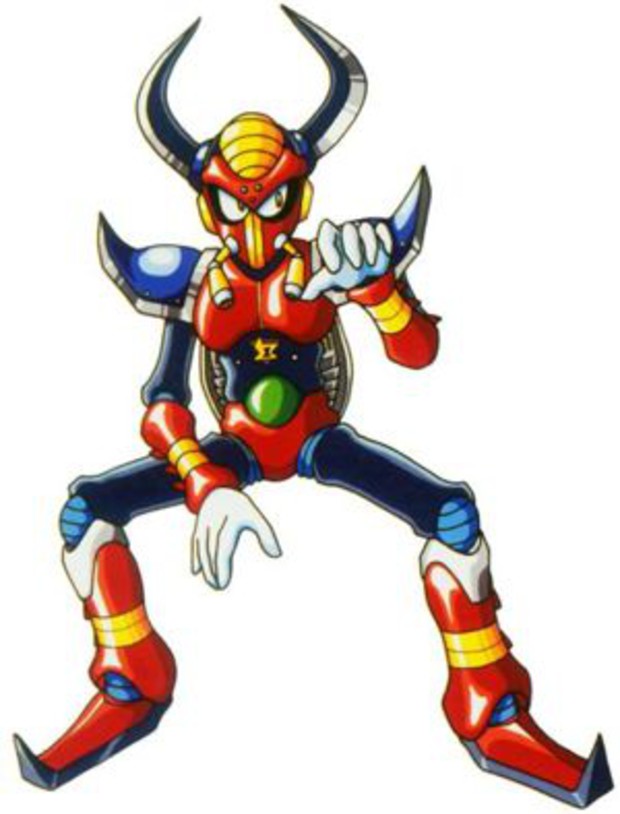 As for the game itself, which I've barely spoken of three paragraphs in, I'll speak at length about how great it is. As near perfect as Mega Man can be. All the bosses are perfect Mega Man style bosses. Instead of being a "Man" they're all animals. And have pretty clear properties, mostly. I've only twice in my life heard a monkey refered to as a Mandrill. I and the rest of the universe see's that type of monkey and says "monkey!" Not Mandrill. And certainly not a "Spark Mandrill." The battles with each boss all feel like classic Mega Man to me. They each have their patterns and weaknesses, but more than that, they react to their weakness. For example, the armadillo is shocked out of his armor and becomes really easy to beat. Another cool thing, is beating a boss effects another level. Such as when the fire level becomes frosted over when you beat the Penguin. Little touches like that make this game super effective for me. All the boss powers are solid powers. You've a three shot weapon, an ice one, a fire one, electrical one, then you have a boomerang, a homing weapon, and then it gets a little obscure. One guy, an Armidillo, gives you the rolling shield. It's a ball shield that rolls, surpisingly. Then you get what is probably the most satisfying weapon in all of the Mega Man games. Nothing has ever made me personally feel as powerful as this thing. Storm Eagle gives you a tornado weapon. Not a little dinky tornado like top man-type would give you or the one in Mega Man 8 that barely shoots up. No, you shoot out a screen crossing vortex that kills everything. Even Super Joes, you know those guys with the shields? This thing murders them. I love it!

Then after you beat all the stages, you get the Sigma stages. Which are all awesome spectacles to behold. Each has a seperate boss that are really wild fights. Like the Spider boss and the door robots. What's really cool is you get Zero, another hero robot in the Mega Man X games, you get his upgraded gun. This allows you to charge your special guns and gives them all new attacks. It's possible to get this earliar in the game, as well as several upgrades, but they're hidden in the levels and I always forget whats where. I know I did when I last played and just said "Well I'll just play it anyway. I don't care about boots that break rocks." And I don't care about the boots that break rocks or the helmet. They're fairly useless. I do care about the Hadoken though. You can actually find a hidden hadoken ability. Nothing really major, just a quick "hadoken!" and its over with.

Anyway then it comes to the impossible final fight with Sigma and his dog. Yes he has a dog. This is the most intense boss sequence in all of video games. Well maybe not. But it is intense. You've a several part fight against his dog, him, then him as a giant room spiked beast that kills you. At least it killed me. I never figured out that the shield was the weapon to use on this guy. I feel like such a loser. Let's all laugh at me who kept charging his weapon to attack this guy. I feel awful about that.

Music on this thing is incredible. It makes such great use of the super nintendo. Mega Man's always known for great music, and X is one of the better examples. My favorite being the Armidillo stage theme. Something about it does it for me. Maybe it's that I've heard it so much grinding for the health to fill up my four back up things. It's just so catchy and sticks with me. I usually play games muted, but I catch myself humming the songs when the sound isn't on sometimes.

As for sequels, X2 and X3 are really great super nintendo games. X4 I bought off of ebay along with Mega Man 8. I love it. It's big addition was anime cutscenes that didn't make Mega Man look stupid. X5, X6, X7, and X8 I passed on. I recently got X5 but I've barely played it. So far its everything I want. At some point I'm going to make time for it, and when I do, I'm sure I'll love it. I can't not love Mega Man games. Proper real Mega Man games. Not this jokey RPG Mega Mans. Which there actually is a Mega Man X RPG that I will probably play. I play everything.

I will mention a fun game that I got for PSP. Mega Man Maverick Hunter X. It's a remake of Mega Man X in 3D, but 2D. All new level layouts for bonus items, unless I'm just stupid and forgot what went where, it adds voices for the storyline stuff (which I don't really follow. X wakes up in the future or something, and I don't care. I want to play Mega Man. How much deeper should a game be than here's the bad guys, go get em!) and I found it to be a great PSP game. It does play with level layouts and boss battles a little. Not much, but I was able to notice some minute differences as someone whose played a lot of Mega Man X. One of only a handful of PSP games that are actually good. I'll also mention Mega Man Powered Up, despite not being Mega Man X. It's a remake of the first Mega Man and also good if you have that system.

Mega Man X is great. A great game. If you have to play one other Mega Man besides 2, play X. American box was great, but look at this Japanese one! Did you guys ever play Mega Man X? I know I sure did. #Community    #Retro
Login to vote this up!