8:05 PM on 01.21.2010 (server time)    0
[Disclaimer: This blog does not represent the views or opinions of Enkido as he exists in a sane state and he cannot be held responsible for the content expressed in this article. He's a cookie monster. Also, cocks.]

So some of you may have heard about that new Sony DVR "torne" that was recently announced for the PS3 in Japan... And NOT in North America. Incidentally did we do something wrong that I should be aware of?

Excuse me for a second readers...


Alright, moving on. It seems that Sony is considering adding Trophies to this new service. Yes trophies... for sitting on your ass and watching T.V. Now my first thought went something like this: 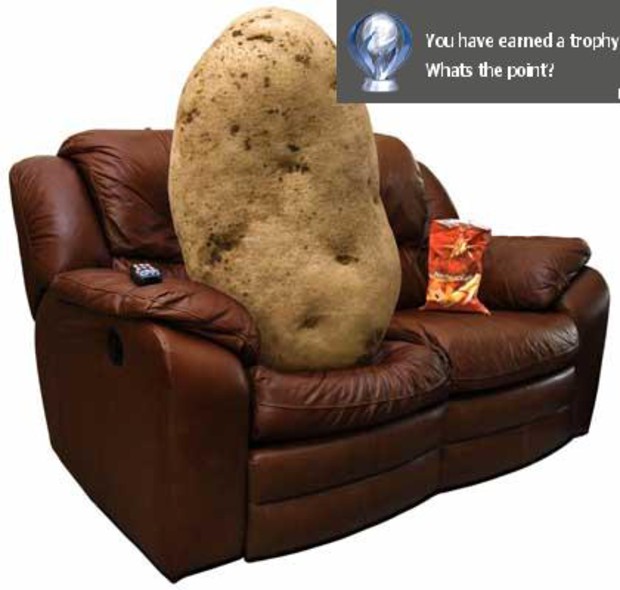 But then I started thinking. I do that sometimes, it is rarely productive, but sometimes entertaining. This could actually be very interesting. There are a ton of Trophies that could be made just for watching T.V. Now, I'm not all that into trophies and I'm far from a Trophy/Achievement whore, but just imagine with me what this could be like. I'm not really in favor of this but I cannot allow the comedic potential of the idea to go to waste.

Some examples I thought of:
Couch Potato
Forgo responsibility and social interaction in favor of T.V.

PSP Potato
Use the PSP to forgo responsibility and social interaction in favor of T.V.

True Fan
Record and keep on season of an entire series.

Vampire
Avoid the light of day by viewing T.V. for 10 hours strait.

Well Informed.
Record a weeks worth of daily news programs.

Journalist
Record a months worth of daily news programs.

Hand in the Cookie Jar
Record an adult oriented program.