1:49 AM on 12.12.2009 (server time)    0
(Note: this series of blogs was written with Street Fighter IV in mind, so that will be the prime example used. Also, I am by NO MEANS an expert at these games, and in fact, suck at them. However, I'm sure the veterans would agree with the statements in this post.)

Fighting games of quality are far and few between now-a-days, meaning that if you're new to the genre you're in for an ass-kicking by veteran players. Does it have to be that way, though? Sort of, but there are some things you can do to become better at fighting games, and start woopin the other new players ;D. 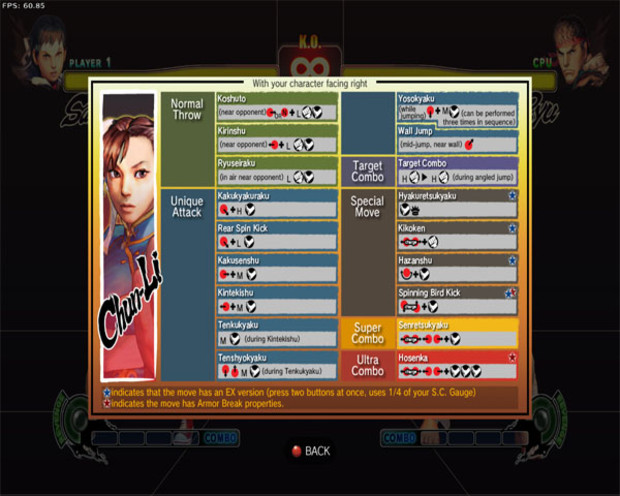 "I think for newbs, first, pay close attention to the basic attacks. Those are REALLY important, as important, if not more important than the special moves. So learn those well, which to use, their distances, and when to use them. Oh, and if you want to be a douche, pick Noel [when playing BlazBlue]." - Tactix
"Beat the game never using a special or super on normal. If you only know the special moves YOU DON'T KNOW SHIT. The controller is to facilitate your strategy, not formulate it. If you're using a charge character, ALWAYS be charging. If you jump in, jump and IMMEDIATELY pull back to charge again while in the air." - Detry
"Follow the flow chart(linktoflowchart). The flow chart is your GOD!" - CrocBox (WARNING: Sarcasm detected; it should also be noted that CrocBox loves Noel.)
"I Agree with Detry, normals are the best thing to learn. Don't be afraid to lose to someone better than you. In fact, look for people who are better than you to play against. If you can find the strategy of someone quickly, and find a way to beat it on a regular basis they aren't worth playing. Learn strategy over spamming specials." - [Slime]

If you want my tips, don't be an asshole. If you get KO'd by someone 'cheaply', its simply because you have a lack of execution. They executed better. Don't complain, take it like a man. When you lose, accept it. When you win, do whatever you want with that fact. You want to be taken seriously? Win. Study this strategy guide. If you lose, learn from it. Don't complain if someone beats you by 'spamming'; obviously it worked, so obviously you let it. It's not a 'win' button, you had every chance to learn to counter it, or fight against it efficiently.

One thing to keep in mind, is that there's a lot of fighting games out there. Everything from Street Fighter, Guilty Gear, BlazBlue, to King of Fighters. There's a LOT of games out there; if you don't like one, don't rule out the entire genre. Different games play differently; it's insane how much. King of Fighters XII plays so drastically different from Street Fighter, or Marvel Vs. Capcom 2. It's crazy the difference in styles, but it's what gives the games personality. Some games suite people differently, but the same basics apply to all fighters. Apply pressure, punish your opponent, and plan to win. Part 1 taught you the mindset, and the basics. Part 2, we'll introduce some more ideas to help you understand the complexity of the genre. In the meantime, go get some practice. Watch matches on YouTube. Maybe some tutorials; but most importantly, have fun with it. At the end of the day, a game is still a game.
#Community    #Xbox360
Login to vote this up!