Finding this was my first order of business. I've been excited about this game since it was announced. Judging by the short demo on display this weekend, I think my excitement is justified.

The demo started with a bit of space combat. You are a medium-sized Federation starship of an unknown class -- probably something new for the game -- and you must defeat two Klingon ships in orbit of a planet the Klingons are invading. The combat controls were basic but satisfying: there's a lock-on button, and there's a fire button. The spacebar fired all weapons at once, photon torpedoes and phasers, but I believe there was an option for firing them independently. You can also control the ship's speed using a sliding throttle at the bottom-left of the HUD. Overall the combat was simplistic but smooth. The lock-on button helped keep enemies on-screen and in view, so as not to lose them in the vast reaches of 3-D space. My hope is that the final game will include upgradeable ship weapons and the like, to flesh out the space bits a little.

An away team then beams down to the planet to deal with any Klingons on the surface. You control the ship's captain and the rest of the team is controlled by the AI. If there were any squad-control options present I didn't see them. This works well for me however, as I'm not a huge fan of micromanagement. I'd rather the AI handle most of the heavy lifting while I focus on my own character. After killing a bunch of Klingons and investigating the situation on the planet, I found my way to a giant portal claiming to be the master of time or some crap. Talking to the portal reset the demo. I don't know if it was just a device to end the demo or some part of the storyline. We'll have to wait and see.

Overall, STO was about what I expected. The basic mission structure seems to function well, and the combat is fun. The demo pretty much just piqued my interest. I can't wait to actually see how it functions online and how you work with and/or against other players.

Not much to say for this one. I played with three other players on the first two levels. It's typical Mario platforming only with four players. For me it was actually a little chaotic. When people spread out across the screen it zooms out, a la Super Smash Bros. and that kind of irks me. Makes it hard to see the action. That's just a minor complaint about an otherwise solid looking game though. Give me a Wii, three friends and few hours and I'm sure I'll fucking eat it up. Loves a bit of Mario, sure.

This was one of the highlights of the show for me. I didn't get through the demo myself, but through waiting in line I did see all of it. If the entire game keeps up the demo's pace, you will be absolutely exhausted when you're done. It goes from one set piece into another quite seemlessly, and it's fun as shit. GoW is still the king of the Quick-Time Event. They're still fun to pull off in this game whereas they feel kind of tired elsewhere.

The combat seems to be generally the same: triangle is heavy attack and square is light attack, while circle grabs enemies. I think this falls under the category of "If it ain't broke, don't fix it." It's still slick and satisfying to slice enemies into tiny bits.

The very end of the demo has Kratos sprouting wings, and you navigating him through a tough looking series of obstacles. This bit looked a little gimmicky to me, but I'll reserve judgement until I actually play it.

Holy God of War rip off, Batman! EA's not even trying to hide it. Judging by the demo on display, this is the same damn game, only greyer, and the hero is nowhere near as badass. He does sport a fancy looking scythe as his main weapon, but using it felt a little sluggish compared to Kratos's chained blades. To be fair, the God of War folks have had four games to tweak their formula.

The demo had the player fight this giant....thing....and then mount it to climb a couple of pillars that crumbled as you climbed. At the top were some demon babies and another...thing. I think the best way to describe the demo is "competent." It's OK, but why do we need this game when we already have God of War? 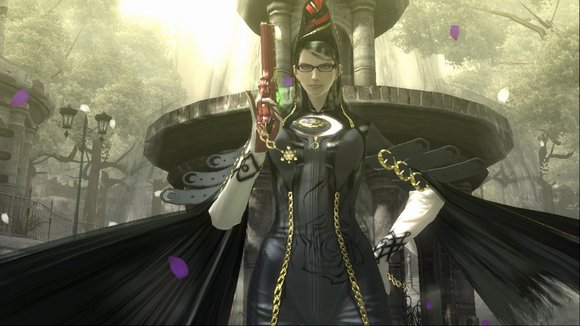 This was another high point of Eurogamer for me. You play a woman with guns in her feet who wears suit made of her own hair, which also changes shape and disappears/reappears through use of different special moves. As if that weren't just the right kind of crazy, one of the demo levels had you fighting on a crumbling clock tower hurtling down the face of a cliff. I would play this one just for the sheer WTF factor, but I would stick around for the combat. It made me feel warm and happy, like everything was right with the world. I may have sprouted a semi.

My only complaint about Bayonetta was that sometimes it just got a bit too intense and I felt like I had lost control of what was going on. I was playing on Easy, so maybe it was just a product of the successful button mashing I was doing, but it was just a tad too chaotic sometimes.

I played some more stuff that I can't be bothered to write much about for one reason or another:

Fairytale Fights: Misleadingly graphic with shitty stick-based combat.
Borderlands: I don't do class-based shooters and this did nothing to change my mind.
Brutal Legend: Decent brawling, never did get to the RTS elements. I don't do RTS either.
Mario and Luigi: Bowser's Inside Story: Played two minutes, saw that it was just like its predecessors, put it on my "To Buy" list. Fucking solid.
Dragon Age: Origins: Sat down, was confused as fuck, left.
PSP Go: *facepalm*

So those are my impressions from Eurogamer in a nutshell. A lot of cool stuff was on display and I had a great time wandering, and even just watching some things being played. I've been playing far too much World of Warcraft lately, and I think Eurogamer got me excited about non-MMO gaming again. This can only be a good thing.
#Community    #Industryevents
Login to vote this up!